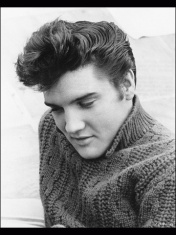 In 1935, on January 8, the future king of the scene, Elvis Presley, was born. Since childhood, he was surrounded by religion, poverty and music. On his 11th birthday, Elvis received a guitar instead of the promised bike, which was beyond his family's means. Then he and his family moved to Memphis, where he became even more interested in blues and contemporary music.

At 18, Presley decided to visit Sam Phillips's record company, where he recorded his first songs, "My Happiness" and "That's When My Heartache Begins".

Later, in 1954, Sam himself plans to record several songs for Sun Records, and calls for this an acquaintance guitarist and double bass player, and in search of a vocalist decides to try Elvis.

The first single "That's All Right" was released on July 19, 1954 and, thanks to almost continuous airplay on the radio, sold 20,000 copies.

Then the singles "Good Rockin 'Tonight", "Milkcow Blues Boogie", "Baby, Let's Play House", "I Forgot To Remember To Forget" were released. As a result, these very works become classics of rock and roll. Surprisingly, his first records were not called rock'n'roll at that time, but still belonged to country (and his then nickname was "Hillbilly Cat" - one of the names of country).

The Blue Moon Boys, which included Moore, Black and Presley, began performing in the same 1954, and it is worth noting that their popularity grew by leaps and bounds. It was then that they traveled all over the South with Johnny Cash and Karl Perkins, and later became regular participants in Louisiana Hayride radio concerts. Here Elvis develops that famous manner of moving during the performance - swinging the hips, arms and body, which delighted the audience.

Through the release of new singles and constant performances, Elvis achieved national popularity, and his single "I Forgot To Remember To Forget" took the 1st place in the Billboard magazine charts. This attracts Tom Parker, who subsequently, in 1955, signs a contract with the singer and begins his promotion. As a result, the singer signs a contract with RCA Records, and already in 1956 the whole world will know about Elvis! He records the single "Heartbreak Hotel", which has sold over a million copies and is # 1 on the national charts.

Further, the single "I Want You, I Need You, I Love You" was released, and the singer's first album, "Elvis Presley". At the same time, television talk shows with the participation of the singer begin, which simply chained almost everyone who saw them to the TV screens. Creativity and the very manner of Elvis's performance were controversial: the teenagers were shocked and delighted, and the older generation saw mediocrity in him, but this only gave the singer the image of a rebel.

In 1956, the single "Hound Dog" was released, and later - the second album of the singer called "Elvis". The audience greeted with warm love both the single and the album, and as a result, the American magazine Variety calls the singer “the king of rock and roll”.

It was his success in music that opened the way for Elvis to the film industry, namely, to Hollywood. He signs contracts with 20th Century Fox and Paramount. "Love me dearly" was the first film with the participation of the singer, released in 1956.

In 1957-1957, the singer continues to release hit singles: "Too Much", "All Shook Up", "Don't", "A Big Hunk O'Love". But unexpectedly for millions of fans in 1958, Elvis Presley was called up for military service in the US Army, which sparked protests among young people. However, Elvis still served in the army, where he performed the same duties as all soldiers.

In 1960, Presley returned to America, where recordings in the studio immediately began, ultimately the album Elvis Is Back! Was released, which received second place and is considered the singer's best album. Throughout 1960, new singles "Stuck On You", "It's Now Or Never" ("O sole mio") and "Are You Lonesome Tonight?" Were released, which received the first places in the charts. But the singer decides to devote himself to cinema. The first film after the army is "Soldier Blues". Blazing Star and Savage follow, but they fail commercially and it becomes obvious that they need to return to the comedy-music genre, followed by Blue Hawaii, which breaks the record for the 1960 US box office.

But in seven years, cinema becomes a burden for Elvis, tk. he starred in three films a year. He returns to music and looks for a new sound for himself, which he finds in country. The singles "Guitar Man" and "US Male" are born.

This was followed by a tour, the decision to leave music forever, to return to the stage again in order to blow up the audience with applause again and again; then depression after the release of the book "What Happened, Elvis?", which was written by his friends, who had been fired early by the singer's father, who felt that they were making a profit at his expense.

On August 16, 1977, Elvis was at his estate. He had just returned from the doctor, he was tired, he wanted to sleep. As a result, he takes sleeping pills, one dose of which seemed insufficient to him - and the singer takes the second. Around two o'clock in the afternoon, his girlfriend does not find him in bed and finds Elvis lifeless in the bathroom. The ambulance arrived ruled: the singer died of heart failure caused by medications.