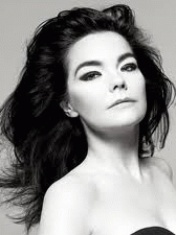 Björk is an iconic Icelandic singer, musician and actress. He is also a laureate of many music awards and the owner of the Palm Branch of the Cannes Film Festival.

Bjork has been singing since the age of 11. She participated in several musical groups, but in the end she decided to sing solo. The singer released her solo album in 1993 and gave it the name "Debut", he gave her world fame and the opportunity to work with other famous musicians. Some of the songs from this disc were written by Bjork as a teenager.

The next album was "Post", released in 1995, which features Nelly Hooper, Tricky, Graam Massey from 808 State and Howie B.

Homogenic, released in 1997, differs from previous records in its more striking experiments with sound.

In 2001, the singer surprises with her courage again with the album Vespertine, which features new electronics, chamber orchestra and choir.

Three years later, Bjork relies on voice and records the album "Medúlla", where most of the sounds are processed vocals.

In 2007, the album "Volta" was released, with which the singer went on a world tour.

The seventh studio album is released under the name "Biophilia" in early 2011, the first single from which was released on June 28 of the same 2011.

Currently, the singer's tour has been canceled due to ligament disease.