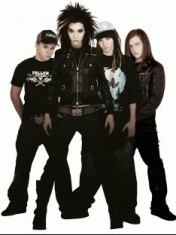 The band was formed in 2001 by two twin brothers from East Germany, Bill and Tom Kaulitz. Initially the group was called "Devilish" (Devilish). After watching the brothers' duo perform, they were joined by bassist Georg Listing and drummer Gustav Schaefer.

Bill Kaulitz as a soloist took part in the TV show "Star Search" (an analogue of the Russian TV show "Morning Star"), where he reached the quarterfinals with The Weather Girls' song "It's Raining Man" (no bands were expected to participate). Thanks to his participation in the show, the leader of the group managed to get to know producer Peter Hoffman, who took over the promotion of the project. At his insistence, the name was changed to a less defiant - Tokio Hotel. The Japanese reference also matched the artist's image, which was reminiscent of the Japanese Visual Kei style. Later, another producer Pat Benzner joins the team.

The band was signed to Sony BMG. The video for the debut single "Durch den Monsun" (German through the monsoon) hit German TV channels in August. After the video was released, the group immediately gained a lot of fans and fans. The single began its journey on the German music charts on August 20 at 15th place, and already reached the 1st place on the 26th. This single also peaked at number one on the Austrian music charts. The group's second video, "Schrei" (German for shouting), was # 1 on all European charts. The band released the album "Schrei" in September.

At the beginning of 2006, the third video "Rette mich" (German: Save me) was released. This version of the song was different from the original version from the first album due to Bill's breaking voice and some instrumental changes. The video for the song "Rette mich" quickly reached the 1st place.

The second studio album "Schrei - so laut du kannst" was released in March. The release was due to changes in Bill's voice and came out with three new songs - "Schwarz", "Beichte", "Thema nr. 1 "In September the band released the fourth single from the album" Schrei "-" Der letzte Tag "(German for the last day). This song also climbed to the very top of the charts.

On November 18, 2006 the group gave a concert in Moscow. This was one of the first performances outside of Germany and this first experience showed that musicians are popular all over the world.

In early June 2007, the English-language album "Scream" and several singles to it were released. With this album, the group begins the conquest of England, Italy, Spain and America.

On October 2, 2009, the fourth studio album "Humanoid" was released. On it, Tokio Hotel's sound changed towards synthpop, the musicians brought more electronics to the arrangement of the songs. IN

7
Love Who Loves You Back