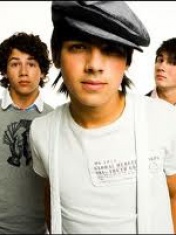 The Jonas Brothers are a popular American pop-rock band made up of three brothers: Kevin Jonas, Joe Jonas and Nick Jonas. The band has released five albums to date: It's About Time in 2006, The Jonas Brothers in 2007, A Little Bit Longer in 2008, Lines, Vines and Trying Times in 2009, Jonas LA "" in 2010 year.

In 2008, the group was nominated for Best New Group at the 51st Grammy Awards. The band also received an award as "Breakthrough of the Year" by the American Music Awards. In 2011, the group received the Bravo OTTO award as the best group of the year. In 2012 they won The Shorty Awards for Best Group.

The group began as a solo project by Nicholas Jonas. In 2002, Nick wrote the song "Joy To The World (A Christmas Prayer)", which became quite popular. Nick soon signed to Columbia Records and released the song "Dear God". For the solo album, Nick recorded several songs with his brothers Joe and Kevin.

However, in 2005, the new president of Columbia Records, Steve Greenberg, offered a contract to all three brothers. The guys decided to name their group "Sons Of Jonas", but later renamed it to "Jonas Brothers".

The first single of the young group "Mandy" was released on December 27, 2005. And their song "Time For Me to Fly" was released as the soundtrack for the movie "Aquamarine". During this time, the group toured with many famous performers.

Their first album "It's About Time" was released on August 8, 2006 in a limited edition of 50,000 copies, in fact, this was the reason for the termination of the band's cooperation with this label.

In February 2007, the Jonas Brothers signed to Hollywood Records. On June 16, 2007, the band began their summer tour of American cities.

Soon the first single "Hold On" from the new album was released, as well as the album itself, named after the group "Jonas Brothers". Its presentation took place on August 7, 2007. In its first week, it peaked at No. 5 on the Billboard Hot 200. Immediately after the album's release, the second single, "SOS", was released. On August 17, they took part in the filming of one episode of the Disney Channel's Hannah Montana titled Me and Mr. Jonas and Mr. Jonas and Mr. Jonas ". They also recorded a song with Miley Cyrus "We Got the Party". This also contributed to the group's success.

On October 18, 2007, Jonas Brothers began a joint tour with Miley Cyrus in the cities of America. Due to their great success, Disney began filming Camp Rock: Musical Vacation and the JONAS series starring the band, both released in summer 2008.

After a hiatus, the band starred in "Camp Rock 2: Report Show" in 2010. The continuation of the film is not yet planned.