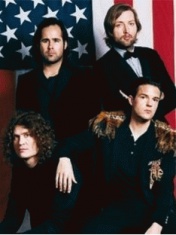 
Fashion rockers from Las Vegas, named after the fictional team from the New Order video "Crystal", followed the motto of Alexander the Great: "I came, I saw, I won." Their very first album, "Hot Fuss", went three times platinum in the US, and in the UK (where the guys were accepted as their own) it surpassed this result twice and climbed to the top of the national chart. Some referred the Killers to the wave of renovationist post-punk, others called them the heirs of Oasis, and still others called them almost new U2. Surprisingly, the Killers played the role of universal soldiers perfectly - their hits like "Mr Brightside" and "Somebody Told Me" worked equally well both in the format of a stadium rock concert and in a dance DJ set. Even controversial DJ Benny Benassi has signed up to be a fan of the Killers.

The second album, entitled "Sam's Town", although it showed good results on the market, clearly reminded of the existence of the well-known syndrome, and the subsequent B-sides collection, diluted with several new things, literally shouted that the Killers had overtaken a creative crisis. Realizing that something needed to be changed, Brandon Flowers and company invited Stuart Price to produce the third record. He previously successfully worked with Madonna (Madonna), and recorded some excellent remixes for the Killers. On the disc "Day & Age", the Killers appeared in the role of almost new Pet Shop Boys: not that the Americans gave up rock altogether, but instead of guitars and live drums, dance rhythms, electronics and brass often appeared. And although the old fans of the Killers were not delighted with this turn of events, the group's audience clearly expanded, the single "Human" became one of the most successful in their career. The song, in which the Nietzschean subtext was revealed, was to the taste of not only fans, but also other musicians, it has already been covered by Robbie Williams, Tom Morello and even Renārs Kaupers of the Brainstorm group.

The list of Killers' achievements includes dozens of awards: the group has eight NME Awards alone (six English and two American), twice the group got the BRIT award, once - MTV VMA awards, MTV EMA, Q Awards, World Music Awards. It is noteworthy that the Killers nominated for awards both in the "rock band" category and in all kinds of dance nominations. The videos were also awarded - the video for the song "Bones" (the only music video shot by the famous filmmaker Tim Burton so far) received the Shockwave NME Award for Best Video of the Year.

05:21
When You Were Young
Когда ты была молодой

03:20
Somebody Told Me
Кто-то мне сказал