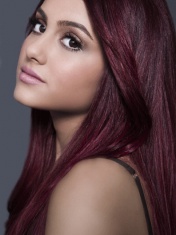 In 2008, Grande sang the role of Charlotte in the Broadway musical 13, for which she won an award from the National Youth Theater Association. Taking part in the musical, Grande dropped out of her school, but did not stop enrolling there. She received materials from the school for which she could study with private teachers. Ariana played the role of Miriam in the first reading of the upcoming musical Cuba Libre, written by Desmond Child. Every year, as a member of the Broadway in South Africa project, Grande teaches singing and dancing to children in South Africa.
In 2009, she was cast as Kat Valentine on the Nickelodeon series Victorious, which forced her to dye her hair magenta. In 2009 and 2010 Grande performed at the Birdland Club in New York with Miranda Sainz.

Dont Be Gone Too Long