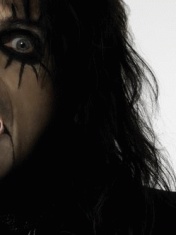 Starting with Detroit garage rock and glam rock, Alice experimented with various musical styles: concept rock, art rock, hard rock, pop rock, experimental rock, industrial, and was directly involved in shaping the sound and appearance of heavy metal. Cooper was one of the first musicians to add horror to rock and roll, and his acting skills and groundbreaking stage discoveries made a significant impact on the development of the genre. Rolling Stone Album Guide named Alice "the most loved heavy metal artist in the world."

Alice Cooper's solo career, which began in 1975 with the concept album Welcome to My Nightmare, continues to this day successfully: in 2011 he released his nineteenth solo album, Welcome 2 My Nightmare.

In addition to his musical activities, Cooper is known as an actor, golfer, restaurant owner and, since 2004, host of his own radio show "Nights with Alice Cooper".