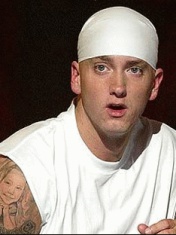 
Marshall Bruce Mathers III, better known by his stage name Eminem (stylized as EMINƎM) and alter ego Slim Shady, is an American rapper, music producer, composer and actor. In addition to his solo career, Marshall is also a member of the group D12 and hip-hop duo Bad Meets Evil. Eminem is one of the top-selling music artists in the world as well as the top-selling artist of the 2000s. He is named one of the greatest musicians of all time by many magazines, including Rolling Stone, which placed Eminem at number 83 on their list of the 100 Greatest Artists. The same magazine proclaimed him the King of Hip-Hop. If you count the studio work of his bands, then Eminem has 10 albums that reached number one on the Billboard 200. As a solo artist, Eminem has sold over 100 million albums worldwide.
Following the release of his independent debut album Infinite in 1996, Eminem achieved immense popularity in 1999 with the release of his debut album The Slim Shady LP on a major label. This LP earned Eminem his first Grammy Award for Best Rap Album. His next two records, The Marshall Mathers LP and The Eminem Show, also won a Grammy in the same category, making Eminem the first artist to win this award for best rap album three times in a row. This was followed by Encore in 2004 and a tour with him, after which Eminem took a creative break. On May 15, 2009, he released his first album in 5 years called Relapse. In 2010, the release of the seventh studio album, Recovery, took place, which was marked by worldwide success and was named the best selling album of the year, as well as The Eminem Show in 2002. Eminem received a Grammy for both the Relapse and Recovery records, for a total of 13 career awards. On November 5, 2013, Eminem released his eighth studio album, The Marshall Mathers LP 2.
Eminem is involved in a variety of activities: he has his own record label, which he runs with his manager Paul Rosenberg, and also has his own radio station, Shade 45 on Sirius XM Radio. In 2002, Eminem starred in the semi-autobiographical hip-hop drama The Eight Mile. He won the Academy Award for Best Song for a Film, becoming the first rap artist to win the award. He also made a cameo appearance in the films "Moika" (2001), "Funny People" (2009) and the television series "Handsome".
Смотреть все