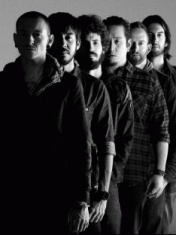 
The American team Linkin Park serves as the best refutation of the thesis that the time of big stars in show business is gone. Fifty million discs sold all over the world (and this with a discography of only three albums) speaks for themselves. They are often criticized for the fact that their music is, they say, a cynically calculated pop product, but it is impossible not to admit that they are the ones who feel the very "Zeitgeist", that is, the spirit of the times, best of all. Their style can be described as a combination of metal, synth-pop (the guys have repeatedly confessed their love for Depeche Mode), hip-hop and pop music, which is usually played by boy bands. Heavy guitar riffs, electronic drums, scratches, verse recitative and monumental choruses - this is the hit formula that Mike Shinoda, Chester Bennington and company offer us.

The band's godfather is producer and music functionary Jeff Blue. He took care of the band from an early stage, helped bring in vocalist Chester Bennington, and finally knocked out a contract with the Warner Music label for Linkin Park, for which the band became a gold mine. The very first album "Hybrid Theory" (this was the name of the group itself at first, but after litigation with the English break duo Hybrid, the Americans decided to name themselves in honor of the Californian Lincoln Punk) became a "diamond" in the USA (10 million copies) and, in fact, provided musicians have a comfortable future. The group was involved in a variety of genre parties: the guys either recorded a minion mashups with rapper Jay-Z, then they remixed their idols Depeche Mode, then suddenly appeared as guests on the Busta Rhymes single "We Made It", which became one of the main themes finals of the NBA-2008. Finally, Hollywood recognized them. Their songs were featured in the films "Dracula 2000", "The Matrix Reloaded", "Twilight" and "Transformers", where LPs were featured in both parts of the dilogy. The first film featured their song “What I've Done” from the album “Minutes to Midnignt”, and for the sequel the band specially recorded the title theme “New Divide”.

A light that never comes

LPTV - Going Old School: The Guys Pass Out Flyers For Their Show

06:25
The Little Things Give You Away