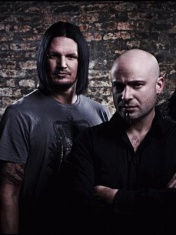 Disturbed is an American rock band formed in 1996 in Chicago, Illinois by musicians Dan Donegan, Steve "Fuzz" Kmak, Mike Wengren and David Draiman and Alternative Metal. Critics also refer the work of the band to Nu Metal. Religious themes prevail in the work of the Disturbed group.

Disturbed was founded when vocalist David Draiman joined the already formed band of Dan Donigan, Steve Kmack and Mike Vengren. He responded to the band's announcement to find a vocalist. It was David Draiman who christened the band Disturbed.

Prior to the addition of vocalist David Draiman, the group was known as Brawl.

Disturbed recorded two demo albums before being signed to Giant Records. In 2000, the group released the single "Stupify" and the follow-up album "The Sickness", after which Disturbed became famous. Many drew attention to the harsh sound of the compositions, generously seasoned with electronics and the soloist's bestial vocals. However, in fairness, it is worth noting that David could equally well, just shout loudly, and sing delightfully. In 2001 the band took part in the Ozzfest festival. And later in his own tour "Music as a Weapon" ("Music as a weapon").

In October 2002, the album "Believe" was recorded, which, like its predecessor "The Sickness", soon went platinum.
In December 2003 bassist Fuzz left the band. The "holy place" has been empty for quite a long time - 6 months. Finally, in March 2004, John Moyer, former Union Underground bassist, joined the band. John is originally from Texas, as a result - his attribute in life is a cowboy hat.

Following the release of Ten Thousand Fists on September 20, 2005, the band toured with 10 Years and Ill Nino. The album debuted at # 1 in the United States. Additionally, two songs "Hell" and "Monster" were available in streaming format, the high demand for which speaks of the great loyalty of the band's fans.

Vocalist David Draiman has been embroiled in a file-sharing scandal: he has been critical of the RIAA's lawsuits against individual users of file-sharing networks, despite the fact that Disturbed is a RIAA-backed publisher. “Instead of spending money on lawsuits against children, they could learn to use the Internet effectively. I didn’t ask them to protect me and I don’t need their protection. ” Said David Draiman.

video for 3 tracks from the album was filmed: Asylum, Another Way to Die, The Animal

Despite the success and sold-out concerts, in the summer of 2011, the musicians announced that the group was going on an indefinite vacation - but perhaps someday in the future they would return to the stage. They explained their decision by a systemic crisis in the rock industry, as well as a desire to engage in personal projects, while assuring fans that the sudden decision was not the result of an internal split in the group.