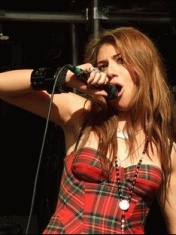 Gabriella Chilmi was born in 1991 in the suburbs of the Australian city of Melbourne, in a family of immigrants from Italy. Already at an early age, the girl began to take an interest in music, and her favorite bands and performers were no longer "fashionable", but from this no less great T. Rex, Led Zeppelin, Cat Stevens and others. Among rock singers, Gabriella was especially impressed by Suzi Quatro and Janis Joplin.

Although the girl had a clear vocal gift, relatives told Gabriella that she could not be a singer. Despite this, Chilmi did not stop her musical activity and as a result, at the age of 13, in 2004, she was noticed by an employee of Warner Music - he heard Gabriella performing the Rolling Stones song "Jumping Jack Flash" at a street festival. Shortly thereafter, Gabriella visited the United States and Britain to sign a contract to record her own material. The girl had to consider several offers, and in the end she made a deal with Island Records.

In fact, it turned out that the same producers and managers who work with the Sugababes group began to deal with Gabriella. Gradually, these businessmen added Gabriella's songs to soundtracks for various films and TV shows, which made Chilmi's name more famous. In 2007 she made her first appearance on British television with her song "Sweet About Me", and in 2008 she released her first album "Lessons To Be Learned". Possessing an original voice and singing style, Gabriella has been compared with such artists as Amy Winehouse and Macy Gray; however, Chilmi differs from them in the openness of the stage manner and in the characteristic image of a broken girl. Freely working in a variety of styles and vocal registers - from jazz to rock to r & b - Chilmi won a whopping six Australian ARIA Awards since her debut album. In 2008, Gabriella took part in the Sugababes, Nouvelle Vague tours and opened the Australian concert of Briton James Blunt. Full-length concerts and small performances around the world continued into 2009.

On March 22, 2010 Gabriella's new album, "Ten", was released. Although the singer herself admitted that during the recording process she listened to the Blondie group a lot, the sound of the album is somewhat different. On the new recording, Gabriella moved away from rock and jazz, turning towards electro-pop and disco, which is clearly demonstrated by the main single "On A Mission", performed in the dance style of the 80s. However, the chorus of this song really reminds of the work of Deborah Harry and Blondie. In the spring of 2010, Gabriella will support Leona Lewis on the latter's UK tour.
Смотреть все