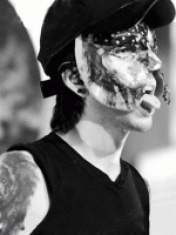 In 2005, Erlichman and his friend J-Dog founded the Hollywood Undead group, which was also joined by their friends: Jeff Phillips, George Reagan, Dylan Alvarez, Jordan Terrell, Matthew St. Clair. J-Dog explained in one of his interviews that the group was formed "from those who were in the room at the time." At the same time, the band recorded and posted their first song, "The Kids". Aron began recording songs in the band under the pseudonym "Tha Producer" due to his role in the group, but in 2007 changed it to "Deuce". Before Aron left the group, they released their debut album Swan Songs on September 2, 2008. The album debuted at number 22 on the US Billboard 200 in its first week of release. Later, the group released two mini-albums: Swan Songs B-Sides EP and Swan Songs Rarities EP. In 2009, the group released their first compilation album, Desperate Measures, which debuted at number 29 on the Billboard 200 chart.
In early 2010, the group announced that Deuce had left the group due to musical differences with the members. Hints that Deuce had left the band came back in late 2009, when he did not take part in the Vatos Locos tour. Later, Erlichman was replaced by Daniel Murillo, the lead vocalist of the post-hardcore band Lorene Drive. In the summer of 2010, Deuce released the song Story of a Snitch in which he stated that he was forced to leave the group. Some of the questions about Deuce's departure from the band were answered in an interview with Byan Stars by members of Johnny 3 Tears and Da Kurlzz. They said the band had to "constantly meet Deuce's touring needs." Da Kurlzz said that "it was so bad with him that I don't think we would have recorded our second album if he had stayed in the band." Johnny 3 Tears said “He didn't like being on the road, so we had to make him happy all the time. Also, he claimed that he wrote all our songs. " Later, the group refused to comment on this situation and did not want to talk about it in more detail.
In an interview with Charlie Scene, he spoke about the situation that led to Deuce's departure from the group. Charlie Scene told the interviewer, “He wanted a personal assistant to accompany him during the tour. None of us had a personal assistant. The group paid for his assistant for 4 months and then refused to pay further ... We went to the airport to fly on our next tour, and he did not show up. We called him and he did not answer. And for two weeks I had to sing instead of him. "
After leaving Hollywood Undead, Aron formed his own band of the same name, which mainly plays in the same genre as Hollywood Undead. In fact it is Aron's solo project, but his friends Jimmy Yuma, Arina Chloe, and Truth also accompany him at concerts.
Initially, Deuce wanted to release his debut album in 2010, but was unable to do so due to problems with A & M / Octone Records, with which he signed a contract when he was in Hollywood Undead. However, this did not stop him from releasing several solo remixes. Deuce has recorded several remixes of songs by famous artists such as 50 Cent, Eminem, 2Pac, and Jay-Z; most of which made it into his first mixtape Call Me Big Deuce in 2011.
Since September 2010, Deuce has been uploading snippets of new songs from the new album, and videos from the studio. In November 2011, he announces the release date of his debut album: March 27, 2012. The album is titled "Nine Lives" and will be released through 10THST. The date was later changed to April 24th. The first single from the album, "Let's Get It Crackin '(feat. Jeffree Star)", was released on November 28, 2011, along with a video clip for it. On January 10, 2012 the second single "America" was released, which was originally planned to be released as the first. The third single is "Help Me", which was released on March 27, 2012, the fourth single was "Nobody Likes Me". In support of his debut album, Deuce also gave a concert at Musique Plus in Canada. The official release of the album "Nine Lives" took place on April 24, 2012. On the same day, the album appeared in the rock music charts on iTunes, starting from the second position.