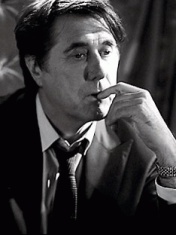 Brian Ferry was born in 1945 to a working-class family in Washington, North England, and in his youth did not receive a professional musical education - on the contrary, at the University of Newcastle, Brian studied art and became a professional ceramist. But since 1964, Ferry played saxophone in pubs and organized various ensembles - his first group was called The Banshees, and then, together with Graham Simpson, he created The Gas Board. But his most successful brainchild was the Roxy Music group, formed with the help of the same Simpson in November 1970.

Although the fresh, unconventional style of Roxy Music immediately won many fans and from 1971 to 1976 the group released albums and performed actively, in 1973 Ferry began a solo career. His first album, These Foolish Things (1973), featured cover versions of a variety of songs by Bob Dylan, the Rolling Stones and the Beatles, and jazz standards. This album became one of Ferry's most famous solo achievements. His subsequent albums enjoyed varying degrees of success; in 2001, Ferry collected Roxy Music again and toured the world for a couple of years with concerts, and then returned to solo activities, never recording a new album with his ensemble. In 2001, his solo recording As Time Goes By was nominated for a Grammy, and in 2006 Brian recorded a magnificent tribute album of Bob Dylan's songs "Dylanesque" and arranged a tour in support of him, during which he visited Russia.

A significant role in the popularity of the singer, in addition to his talents as a vocalist, pianist and songwriter, was always played by his chic appearance and impeccable style - higher education in the field of art affected. It was said that Brian, staying at different hotels during the tour, could rather redesign the premises than turn his room upside down, as did many rock stars of the time. Brian has always met gorgeous women, whom he shot in his videos and put on the covers of records. Ferry had an affair with Amanda Lear, and then he dated for a long time with model Jerry Hall, who eventually went to Mick Jagger - now Brian prefers not to even talk about her. Since 1982, Ferry has been married to Lucy Helmore and fathered four sons, but divorced in 2003, with Lucy receiving £ 10 million in compensation. Despite his venerable years, Ferry is still a frequent character in the gossip, not hiding his amorous adventures from the public. Brian also collaborates with fashion designers - in 2006 he became the face of the new collection of the Marks & Spencer brand.