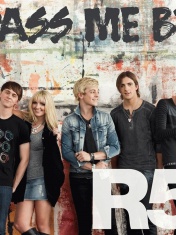 The debut EP Loud was released on February 19, 2013, named after the title track "Loud". The band's first album, Louder, was released on September 24, 2013 and the album includes not only four songs from the EP Loud, but also seven new songs. The first single from the album was "Pass Me By", which premiered on Radio Disney on 16 August. The video premiered on August 29 on Disney Channel and is available for public viewing on the group's Vevo channel.

2
Heart Made Up On You