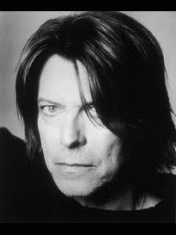 He is often called the "chamelon of rock music" because of the frequent change of image, both in appearance and in creativity.

David Bowie became known to the general public in the fall of 1969, when his song "Space Oddity" reached the first five in the UK charts. After three years of experimentation, he appeared in public in 1972 during the heyday of glam rock, creating a vivid character named Ziggy Stardust. His hit "Starman" from the acclaimed album "The Rise and Fall of Ziggy Stardust and the Spiders from Mars" entered the top ten UK charts. During the relatively short period of use of the image of Ziggy Stardust, Bowie often applied musical innovations and unusual visual productions.

In 1975, Bowie achieved his first major success in America with the number one single "Fame", co-written with John Lennon, and the album "Young Americans," which the singer described as "plastic soul."

He then released the minimalist album Low (1977), the first of three discs of the so-called Berlin Bowie Trilogy, recorded with Brian Eno over the next two years. All three albums entered the top five in the UK charts and received extremely positive reviews from critics for a long time.

In 1981, he and Queen recorded the single "Under Pressure", which also reached the top of the UK charts. Bowie's next peak of commercial success came in 1983 with the release of Let's Dance, which included hits such as Let's Dance, China Girl and Modern Love. Throughout the 1990s and 2000s, Bowie continued to experiment with genres of music, including white soul industrial, AOR and jungle. His last studio album was Reality (2003).

In 2000, David Bowie was named the Most Influential Musician of the Century in a New Musical Express poll.

Over the course of his career, David Bowie has sold over 136 million records, making him one of the ten most successful artists in UK popular music history.

5. The Rise and Fall of Ziggy Stardust and the Spiders from Mars (1972)

10:25
Love Is Lost (Hello Steve Reich Mix by James Murphy for the DFA)