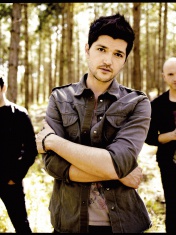 The group was formed by Danny O'Donoghue (lead vocals and keyboards) and Mark Sheehan (guitar and vocals), who previously played with the band Mytown. The debut album "Mytown" was a disaster, and after the band's disbandment Danny and Mark moved to the USA, where they were engaged in producing activities with such artists as The Neptunes, Rodney Jerkins, Teddy Riley and Dallas Austin, and after a few years, deciding to create a new group, they returned back home, to Dublin, where drummer Glen Power joined them, and they became known as "The Script".
In the spring of 2007, they signed a contract with the Phonogenic label. Their debut single "We Cry", released only a year later (April 25, 2008), hit the rotation on all the most popular radio stations in the UK, bringing the group long-awaited fame. And the next single "The Man Who Can't Be Moved" was even more successful, reaching # 2 and # 3 in the UK and Irish charts respectively, thus allowing the band to loudly declare themselves as very promising newcomers to the UK. pop rock scene.
In August 2008, their debut (in a new line-up) album "The Script" was released, which immediately took the first place in the rating of the best-selling albums in Great Britain and Ireland.
In July 2010, the band announced the release of their second studio album, Science & Faith. Lead single "For the First Time" is out in August; the album was released in September.
At the end of November 2011, after the end of the Science & Faith Tour, The Script announced that they were working on a new album called "# 3". The album was released on September 7, 2012, following the release of the single "Hall of Fame". The single peaked at number one on the official UK charts, staying at the top for two weeks.
Their music has been used in video games and popular television series like 90210: The New Generation, Ghost Whisperer, The Vampire Diaries and others.

03:49
В избранное Новый плейлист
Клип The Script - If You Could See Me Now