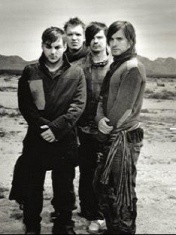 
30 Seconds To Mars is a unique example of the versatility of individual talents: the point is that in this undoubtedly very successful and titled collective, the main character is the famous actor Jared Leto, known for the films "Fight Club", "The Thin Red Line" and " Alexander". Unlike his fellow actors who sometimes perform on the rock stage, such as Bruce Willis or Keanu Reeves, Jared has succeeded in the field of rock and roll almost more than in the cinema.

It all started in 1998, when Jared, along with his older brother Shannon, began to record their first album. The third in their company was the famous American producer Bob Ezrin, who not only brought the record to its senses, but also took part in the recording sessions, playing the piano. The first disc (it was called “30 Seconds To Mars”) turned out to be very, very successful: the strong, frank rock of the new “star” group fell in love with American music lovers (and the rising star Jared did his job) - the album was sold in circulation in 100,000 copies, which was very, very good for a debut.

For the second disc of the group, a full-fledged line-up was already recruited and the Leto brothers did not have to show the wonders of multi-instrumentalism. The second album "A Beautiful Life" propelled the group into the ranks of strong professionals, and the disc earned platinum status. After collecting a bunch of various music awards (Jared did not forget to act in films), the group fell out with the Virgin record label, which filed a lawsuit for 30 Seconds To Mars for $ 30 million. Despite such impressive problems, Jared Leto assured fans that the team is not going to break up, but, on the contrary, will rally even more in a difficult situation.

Jared became interested in transcendental meditation - and even, by his own assurance, learned how to write songs in a trance state: this is how several songs for the group's third album were written. In general, work on it was carried out in a state of terrible excitement: the musicians made sketches for more than 100 songs, of which they eventually selected 20. In parallel, Jared informed the devoted fan club of the group called Echelon with a request for help in recording and designing the new album. Several hundred fans from around the world gathered in the studio and recorded choral parts for the band's new songs. Some particularly violent comrades were even given cardboard boxes into which they could beat rhythmically.

At the same time, Jared encouraged fans to send him their photos - they were supposed to be used to compose the cover of the new album, and as a result, the disc "This Is War" was released in 2000 designs. A few American fans, by the way, were not greedy, and bought up an album with all the cover options, which undoubtedly enriched not only their collection, but also their own favorite band.