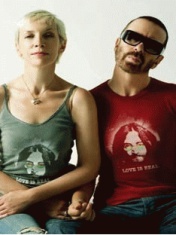 
The Eurythmics became popular in the early 80s, after the breakup of the short lived The Tourists, with which Dave and Annie released 3 albums. Eurythmics' debut album "In the garden" was recorded in Cologne studio under the direction of German producer and renowned music innovator Conne Plank, who influenced the band until his tragic death in 1987.

Combining popular European electro rhythms with harsh melodies and thrilling lyrics, this album propelled the band to a resounding worldwide success, consolidated in 1983 with Sweet Dreams (Are Made Of This). Annie's mesmerizing, strong voice combined with melodic and explosive songs - it was in this fusion that critics saw the reason for such a large-scale success of this particular work of Eurythmics.

The images created in the videos reflected the mood of the musicians. Their ability to manipulate images became even more tangible after the release of their third album, "Touch", in November 1983. The duo's success attracted the attention of director Michael Radford, for whose film adaptation of Orwell's 1984, they recorded the soundtrack.

Album "Be Yourself Tonight", released in 1985, reflects the state of mind of the duo at that time and takes them back to the roots of rhythm and blues. The album includes songs recorded with Stevie Wonder ("There Must Be An Angel" - the first # 1 single Eurythmics in Britain), Elvis Costello ("Adrian") and Aretha Franklin (Aretha Franklin) ("Sister Are Doin" It For Themselves ").

The album "Revenge", released in the summer of 1986, marked an abrupt change of direction. This, the most rocky Eurythmics album, has sold over 1 million copies in Britain alone.

In 1987, the album "Savage" collected conflicting opinions from critics and audiences.

In 1989, Annie received the British Phonographic Institute's Best Female Artist award. Dave Stewart and Jimmy Iovine released the co-produced album "We Too Are One" and embarked on a 66-day world tour that lasted until early 1990.

In 1991 the compilation "Eurythmics Greatest Hits" was released, which included the best songs of the group. This disc became another # 1 Album of Eurythmics, selling over 6 million copies worldwide.

In November 1993, the double CD "Eurythmics Live 1983 - 1989" was released, which included 22 tracks performed live and recorded by the group over 6 years of co-creation. (Prior to this, an acoustic bonus CD was released containing 6 tracks - it was recorded in Rome in 1989.) Stewart mastered the album at his Crouch End studio. The songs were recorded during 21 concerts in 10 different countries from Sweden to Australia, and together they represent a brief history of Eurythmics. The collection includes both early singles (like Never Gonna Cry Again, 1981) and a single from the band's last studio album, We Too Are One (1989).

After the unofficial breakup of the group, Dave and Annie took up solo projects. Dave has worked with The Spiritual Cowboys, Vegas and has done a variety of other jobs, including video. Annie has released the very successful albums "Diva" and "Medusa".

And on October 18, 1999, everyone witnessed, of course, one of the most important musical events of 1999. It was on this day that the release of the new Eurythmics album "Peace" was planned. However, this disc was the last for the group - the musicians did not officially announce the breakup for another six years, went on tour and performed at large-scale group concerts, even released the Ultimate Collection. However, the long-awaited "second swallow" of the reunion did not take place - Annie Lenox returned to solo activities, and Stewart focused on producing work. Eurythmics parted ways again, but for how long?

04:08
В избранное Новый плейлист
Клип Eurythmics - Thorn In My Side

04:42
Клип Eurythmics - There Must Be An Angel (Playing With My Heart)