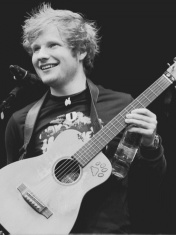 Ed Sheeran was born in Halifax, West Yorkshire, later moved to Framlingham, Suffolk. At an early age he learned to play the guitar and began writing songs while studying. In 2005 he made the first recordings, released on the mini-album The Orange Room. Sheeran released two more mini-albums: Ed Sheeran (2006) and Want Some? (2007). He was a guitar technician for Nizlopi, and in April 2008 he performed as an opening act for her. In the same year he moved to London, where he began playing concerts every day, starting with small venues.
In 2009 Sheeran played 312 concerts. According to him, he read an interview with James Morrison, in which he admitted that he gave 200 concerts in a year, and Sheeran decided to exceed this number. In the same year, he released the mini-album You Need E's and soon toured with Just Jack.

In February 2011, Sheeran posted a video for the song "You Need Me, I Don't Need You" via the SB.TV YouTube channel and released another mini-album, Loose Change. In April, he traveled to Los Angeles, where he performed throughout the city and caught the attention of Jamie Foxx, who invited him to his radio show.
In 2011, Ed Sheeran signed to Asylum / Atlantic Records, and in September his debut studio album, "+", was released, topping the UK charts. [5] The first single from it "The A Team" debuted at number three in the UK. Also, in 2011, Sheeran shot a video for the song Lego House (English) Russian. featuring actor Rupert Grint. [6]
In 2012, Sheeran shared stage with Nick Mason (Pink Floyd) and Mike Rutherford (Genesis, Mike & the Mechanics) at the closing of the XXX Summer Olympic Games in London. A group of Sheeran (guitar), Rutherford (12-string guitar), Richard Jones (bass) and Nick Mason (drums) performed the song "Wish You Were Here" from Pink Floyd's 1975 album of the same name.
In late 2012 he embarked on an international tour with Michael Rosenberg (Passenger)
Taylor Swift contacted Ed Sheeran after listening to his music during her Australian tour in March 2012. Later, Ed and Taylor recorded vocals for the single "Everything Has Changed", released in October 2012 on Taylor Swift's fourth album, "Red". Ed Sheeran played 64 concerts on Taylor Swift's North American tour in support of Red, which ran from March to September 2013.
On June 23, 2014 the official release of Ed Sheeran's album "X" (multiply) took place. Album X was recorded in Los Angeles with producers Rick Rubin and Pharrell Williams. Ed's longtime friend Foy Vance has co-written several songs. The debut track from the new album was "Tenerife Sea", which was performed at Madison Square Garden in October 2013.
Throughout his musical career, the singer has received more than 30 awards and was nominated for a Grammy.
Sheeran is a close friend of One Direction, he wrote 4 songs for them, which were included in the guys' albums.
In October 2015, his first concert film will be released, which contains footage from the biggest concerts in Ed's life at Wembley Stadium, held in July 2015, where he slaughtered 80 thousand people with his greatest hits "The A Team", "Sing" , "Thinking Out Loud" and a duet with Sir Elton John.
The recordings of the performances will be harmoniously diluted with videos from the road and from behind the scenes, where Sheeran, the guys from the team and his friends will share with the audience their thoughts on the musician's career path.