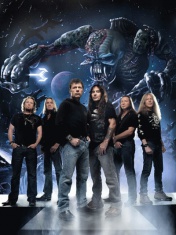 Iron Maiden was founded on Christmas Day 1975. The band's name, "Iron Maiden", was borrowed by Steve Harris, the band's leader, from the movie "The Man in the Iron Mask," which featured a medieval torture device of that name.

In April 1980, the band's debut album, Iron Maiden, was released, which was a great success: it climbed to number 4 in the UK album sales chart.

The second album "Killers" was produced by Martin Birch, who made the album sound much better than its predecessor. Nevertheless, the album was received rather coldly by critics.

At the same time, Iron Maiden conducted their first world tour, visiting the United States, Canada and Japan. At this time, most musicians were dissatisfied with the work of vocalist di Anno: he drank a lot, used drugs and often could not sing at the required level. Paul was fired by the band's decision and was replaced by Bruce Dickinson (formerly of Samson), who later became the most famous "voice" of Iron Maiden.

In 1982, the band's third album, The Number of the Beast, was released.

In December 1982, drummer Clive Barr left the band due to personal problems. Drummer Nico McBrain was invited to replace him, with whose participation the band soon released the next album, "Piece of Mind". The new album was the first to reach platinum status in the United States.

In September 1984, the band released the album Powerslave.

In 1990, Iron Maiden released No Prayer for the Dying, which had a rougher sound than the previous record.

In 1992, the album "Fear of the Dark" was released, which was much longer, because was the first Iron Maiden album to be released on CD.

In 1993 Bruce Dickinson left the group and continued his solo career. In 1994, the band, after auditioning hundreds of famous and unknown vocalists, selected Blaze Bailey, a former Wolfsbane member.

With the new line-up, the band released The X Factor, which peaked at the lowest position on the UK album charts.

In 1998, an even more commercially disastrous album, Virtual XI, was released.

Iron Maiden only did a tour titled Ed Hunter in 1999, with the band's former members Bruce Dickinson and Adrian Smith being invited to take part. The band reunited and the album "Brave New World" (2000) was recorded, followed by a tour in support of it.

Dickinson and Smith made the decision to stay with the group permanently. At the same time, neither Janick Gers, nor Dave Murray left its line-up, so Iron Maiden ended up with three guitarists and six permanent musicians in total.

The new, fifteenth studio album "The Final Frontier" was released on August 16, 2010. The first single for him was the composition "El Dorado".

03:20
Can I Play With Madness
Стоит ли шутить с безумием

03:20
The Evil That Men Do
Зло, творимое людьми

04:54
The Number Of The Beast
Число зверя

04:37
Bring Your Daughter To The Slaughter