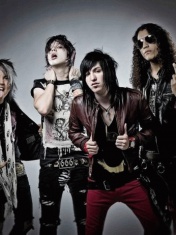 Escape the Fate is an American post-hardcore / glamcore band formed in Las Vegas, Nevada in 2004. The group has released three EPs and three full-length studio albums. "Dying Is Your Latest Fashion" is the band's debut album. This is the only studio album to feature the voice of vocalist Ronnie Radke. This War Is Ours, released on October 21, 2008, was the band's first album to feature Craig Mabbitt as the new vocalist. Their self-titled third album was released on November 2, 2010, initially on the major label DGC / Interscope. Escape the Fate is considered the most successful album to date.