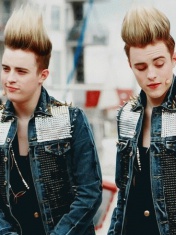 In 2009, the then unknown duo took part in the audition for the sixth season of the popular music competition "The X Factor". During the audition, the band performed under the name "John & Edward" and performed the Backstreet Boys' song "As long as you love me". The musicians advanced to the next semi-final, but were severely criticized by some members of the jury.

During the performance in the first semifinal, another scandal flared up around the performance of the duo. After the twins' performance, Simon Cowell called them "disgusting little creatures ready to walk over corpses to record a hit." Despite this, the twins were supported by the other members of the jury, and they managed to enter the second semi-final ("Judges houses"), where they were taken under the mentorship of Lewis Welch. Then John and Edward chose a new name for the band - "Jedward" (J (John) + Edward).

On November 21, during the next stage of the competition, Jedward again found themselves in the "danger zone" together with Ollie Moers. According to the results of the jury's vote, the Grimes brothers left the project.

After the termination of participation in the project, the name "Jedward" was finally assigned to the group. The former contestants were produced by their former mentor Lewis Welch. Under his leadership, they recorded their debut single "You Are Not Alone", which later went platinum in Ireland and the UK.
On February 1, 2011 the band won the Irish national selection for Eurovision 2011 with the song "Lipstick".
The composition was performed in the second semi-final of the competition (May 12, 2011). According to the results of the audience vote, the duo managed to reach the final of the competition, taking eighth place in it. In the final, their performance was also successful, and with 119 points, John and Edward Grimes were again placed in eighth position in the final standings.

How did you know