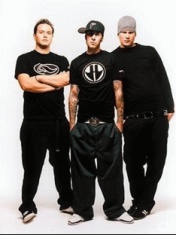 
The bassist and guitarist of the future Blink-182 met in 1992 at the initiative of the guitarist's sister Mark Hoppus. Soon, the guys decided that they needed to make a full-fledged band, invited drummer Scott Raynor, and began to actively rehearse - until the moment when Mark's girlfriend declared "either the group or me." Mark hung his nose and went to the girl, but bassist Tom DeLonge told him that he "took to drive" a four-track tape recorder and was already writing a demo with the drummer. The girlfriend was abandoned, and the musicians continued with rehearsals called Blink. Under the same name, they recorded their first studio album "Buddha", which was released on cassette in 1993.

“Buddha” was perceived by the musicians to be more like a demo tape; they soon signed to Cargo Music and released their next album, Cheshire Cat (1994), which included updated tracks from the previous record. Here the group was sued by Irish musicians performing under the same name, and had to add the prefix 182 to the name of the group. The third album "Dude Ranch" (1996) was recorded under a contract with Cargo, but soon the musicians had to switch to MCA from for the increased popularity that the single "Dammit" brought them. In 1998, Blink-182 went on a tour, during which drummer Raynor left them (he had to go to the clinic due to alcohol problems - obviously, he could not stand the growing popularity). Instead of Raynor, Travis Barker sat down for the installation, leaving his old band The Aquabats for a new place.

The album Enema of the State (1999) brought a really big success to the group - it released the famous songs "What's My Age Again", "All the Small Things", "Adam's Song", and the cover was decorated with a portrait of the porn star Janine Lindemulder in the guise of a nurse ... The singles from the album got into rotation on radio and television, and the album itself sold more than 15 million copies, becoming the best-selling album for the group. In 2001, another commercially successful album was released, "Take Off Your Pants & Jacket", which sold nearly 5 million copies worldwide. However, the European tour following fall was canceled due to the September 11 terrorist attack in New York; resumed concerts also did not take place due to health problems of the musicians. In 2003 the band recorded the album "Blink-182", which was intended to introduce a new line in creativity. On the song "All of This" the band's idol, the leader of The Cure, Robert Smith, performed as a guest.

However, despite the success, tension grew in the group - the drummer and bassist took up a side project called Box Car Racer, then DeLong asked his colleagues for six months to spend time with his family, unanimity was not reached on whether what the next album should be ... In 2005, Blink-182 went on unlimited vacation due to the fact that bassist Tom DeLong "slammed the door" and left the band.

In 2008, Jerry Finn, the producer with whom the musicians recorded their last two albums, died. This sad event became an incentive for the guys to call and talk to each other. Another misfortune brought them even closer together - drummer Travis Barker got into a plane crash and miraculously survived. While he was in the hospital with burns, DeLong and Hoppus visited him - they must have started talking about the possible recovery of the group.

In February 2009, at the Grammy Awards, all members of Blink-182 announced a reunion. Later, a message from the band appeared on the official website stating that the musicians are back in the studio and are working on the next album. In July-October 2009 the American tour of the group took place, and in summer 2010 Blink-182 will arrive in Europe. According to the musicians, they will do everything to make the new album come out in 2010.