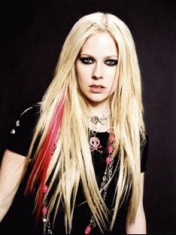 Avril Lavigne has dreamed of a musical career for a rock star since childhood. “When I was little, I often got up on the bed and imagined that I was standing on stage. I sang with all my strength and imagined thousands of people listening to me with bated breath, ”says Avril. She achieved her goal: now the girl can perform anywhere and sing whatever she wants - and there will be loyal fans everywhere.

Avril was born in the small town of Napanee (Ontario, Canada) in 1984. The city with a population of 5 thousand people is a small audience for a girl who wants to conquer the world, so at the age of 15, leaving school, Avril went to New York. During the audition, Antonio Reid became interested in her, who helped Lavigne sign a contract with Arista Records, and Avril sat in the label's studio in Manhattan, working on her debut album. “I like writing. When I’m upset or upset about something, and I need to throw it all out of myself, then I take up the guitar. At times it seems to me that the guitar is my therapist, ”said the girl. Despite the fact that the singer literally did not leave the New York studio, the result she received did not satisfy her at all. “I worked with very talented people, but I just didn't feel it. The songs that came out didn't include me. They told me that I needed to find people who would write songs, but I wanted to do everything myself. " According to Avril, it was a very difficult period in her life. “I was constantly stressed, but I never even thought to quit music,” says the singer.

As a result, Avril moved to Los Angeles, where she met producer and songwriter Cliff Magness. As soon as Avril started working with him, she immediately realized that she had finally found the right guy. “We fit perfectly together, because he just let me lead everything. He understood me and gave me the opportunity to do what I want. Songs just poured out of me, ”Lavigne recalls.

Album "Let Go" was released in 2002, and in a few months sold 100 thousand copies. In total, by the end of 2002, more than 5 million copies were sold. In it, according to Avril Lavigne, she finally found herself. “I am glad that I have an amazing opportunity to fulfill my dream. I love the fact that I constantly perform, a quiet life is not for me, - says the singer. - I am honest with myself - I write what I feel, and I do not care what people think about it. I will dress the way I want, behave on stage as I want and sing about what I want. "

The singer devoted the first half of 2003 to concert activities and receiving prizes for the album. At the Juno Awards in April, "Let Go" won four awards at once. Including - in the nomination "Best Album" and "Discovery of the Year". The album was even nominated for a Grammy, but in the end it never finished.

With her second album, Under My Skin, the young singer strengthened her reputation - the album debuted at the top of the charts in several countries. The total circulation of the album worldwide has exceeded 14 million copies. Unlike Avril's debut, "Under My Skin" is more personal and somewhat darker. For this album, Lavigne won two World Music Awards and three native Canadian Juno. After a long tour in support of the album, Avril decided to temporarily switch from music to other activities - and for a start she tried her hand at dubbing cartoons, giving her voice to one of the heroines of the cartoon "Lesnaya lads".

In November 2006, 20th Century Fox commissioned Avril to write a song for the movie Eragon, and this is how the song Keep Holding On was born. At this time, Avril was already working on her new album, titled "The Best Damn Thing". While touring in support of 'Under My Skin', Avril realized that what she enjoyed the most was performing energetic, catchy songs from the stage - and the new album was performed in that vein. Many of Avril's songs have ceased to be frankly "personal" in nature - by her own admission, it gave her great pleasure to write lyrics about "situations that could never get into my diary."

"The Best Damn Thing" was released on April 17, 2007. Avril herself describes her like this: "fast, funny, young, aggressive, self-confident, impudent, cocky, playful ... in general, all the best that happens in life." This album also contains the largest number of obscene expressions in the entire career of a young singer. Together with Avril, her husband Derek Whibley and a whole team of producers worked on the disc; The drums on several of the songs were recorded by Travis Barker of Blink 182.

The album topped the charts in the USA, UK, Mexico, Austria, Brazil, Germany, Greece, Indonesia, Isril and Pakistan. In the first three months of sales, it sold 3 million copies. Not without a small scandal - in July, Chantal Krevyatsuk, co-writer of Avril's songs from the previous album "Under My Skin", accused Lavigne of stealing one of her songs. And even later, two composers accused Avril of the fact that her hit single "Girlfriend" was the cover of the hit of the 70s group The Rubinoos "I Want to Be Your Boyfriend". In response, Avril Lavigne published an open letter on her website, in which she said that she had never heard the song "I Want to Be Your Boyfriend" in her life, knew nothing about The Rubinoos, and was considering suing Chantal Kreviatsuk for speaking out, damaging her reputation. As a result, not a single trial took place.

Since July 2006, Avril Lavigne has joined the ranks of married women - she was chosen by the vocalist of the group Sum 41 Deryck Whibley, with whom the singer met since 2004. However, on October 9, 2009, the couple divorced.

Fun fact: Avril Lavigne starred in five episodes of the comic sitcom Avril Lavigne's Make 5 Wishes, and she needed increased police protection throughout all five episodes as she was constantly beset by fans. One of them infiltrated the set so persistently that he got a sentence for disturbing public peace.