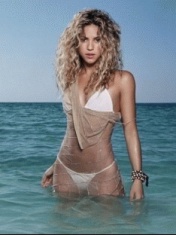 Shakira's first disc dates back to 1990, but the road to international fame was long. Her first albums went unnoticed even in her native Colombia. Things got better after producer and co-writer Luis Fernando Ochoa joined the recording. Album "Pies Descalzos", the third in discography, followed by "Dónde Están los Ladrones?" became world bestsellers, but did not receive much fame in Europe - their audience was exclusively Spanish-speaking. At the same time, Shakira's musical palette was very wide: from disco and Latin American ballads to pop-rock in the style of Alanis Morissette. There was even an oriental flavor in her songs - Arabic blood flowed in the singer's veins, and young Shakira developed her artistic abilities by performing a belly dance at school matinees.

A breakthrough into the English-language mainstream was the album "Laundry Service", released in 2001. The single "Whenever, Wherever" became the calling card, and the total circulation of the album exceeded 14 million. The experienced manager Freddy DeMann, who had previously worked with Madonna and Michael Jackson, contributed to this not least by the experienced manager Freddy DeMann who took over the promotion of Shakira. The success outside of Latin America did not discourage the singer from continuing to work in the Spanish-speaking market. The next in her discography was the bilingual dilogy "Oral Fixations". The album “She Wolf”, released in 2009, again became a sharp turn, this time Shakira plunged headlong into modern dance music. Wyclef Jean, Timbaland and the Neptunes joined the work on the album, and the style shifted towards R&B and electropop. The track "She Wolf" would fit perfectly into a disc for Little Boots or Roisin Murphy. To make the disc catch on those who are closer to Spanish lyrics, the songs "She Wolf", "Why Wait" and "Did It Again" were recorded in two languages at once.

03:44
Can't Remember To Forget You (Behind The Scenes)