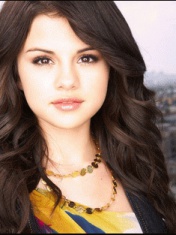 Selena Gomez was born in Grand Prairie, Texas. The parents named the girl after the popular Latin American singer Selena Quintanilla-Perez, who died in 1995.

Selena Gomez's mother is theater actress Amanda Down "Mandy" Cornett (she has Italian-English roots). Her father is Hispanic Ricardo Joel Gomez. When the future star was 5 years old, her parents divorced. The mother raised her daughter alone (and she gave birth to her, by the way, at the age of 16), often took the girl to her performances and thus taught her to the stage. Soon, Mandy married Brian Tifi.

Selena started her acting career when she was just 7 years old. She starred in the television series Barney & Friends, the blockbuster Spy Kids 3: Game Over, and the serials All Tip-Top, or the Life of Zach and Cody and Hannah Montana.

Disney TV actively offered the girl a job. So Gomez became the leading actress in the popular teenage series "The Wizards of Waverly Place". Her popularity skyrocketed, and she was even called "the new Miley Cyrus". During the filming of this series, Selena wrote several songs as a soundtrack to it. From that moment on, her musical career began. In September 2009, her band's debut album, Selena Gomez & the Scene, was released.

From adolescence, Selena began to actively engage in charity work. In 2009, she became a UNICEF Goodwill Ambassador and the youngest member of the foundation in its history. In addition, Gomez decided to try her hand at the fashion world. In the fall of 2010, she released her first clothing collection, Dream Out Loud by Selena Gomez.

Selena from childhood was immersed in work and social life, and she had no time to go to school. Therefore, in 2010, Gomez received a diploma of completed secondary education at home.

At the age of 12, Selena Gomez donned the "purity ring", which means she promises to keep her virginity until the wedding. In 2010, Gomez began dating Canadian singer Justin Bieber , and in the spring of 2011 there were reports that Selena had removed her "purity ring." Before Bieber, Selena had a relationship with Nick Jonas of The Jonas Brothers.

Selena loves animals. She assures that 5 dogs live at her house. Gomez can not only sing, but also play the piano, guitar and drums.

18
The Heart Wants What It Wants

5
One And The Same

16
Fly To Your Heart

30
Tell Me Something I Don't Know

02:58
Everything is Not What it Seems