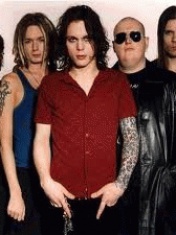 HIM is one of the most successful Finnish rock bands, formed in 1991 by vocalist Ville Valo, guitarist Mikko Lindström and bassist Mikko Paananen.

The band first performed cover versions of the songs "Black Sabbath" and "Kiss". Only in the mid-90s Valo began to compose his own material.

The group's debut was the 1995 mini-album "This is Only the Beginning".

The following summer, HIM recorded the single 666 Ways To Love: Prologue, and in 1997 released their debut album Greatest Lovesongs vol. 666 ". But the band became widely known for the cover version of Chris Isaac's song "Wicked Game" performed by "HIM".

The group released their second album "Razorblade Romance" in 1999, and it became really successful, hitting the top lines of the German charts.

Then HIM released Deep Shadows and Brilliant Highlights.

But the greatest popularity of the group is brought by the 2003 album "Love Metal".

In 2004, the group deservedly released a collection of hits “And Love Said No: The Greatest Hits 1997-2004. But it wasn't until 2005 that HIM hit the Billboard charts for the first time with their Dark Light album.

Then the group is doing better: their next album "Venus Doom" was released in September 2007 and hit the twelfth spot on Billboard in the United States.

On February 8, 2010, the new album "HIM" was released under the name "Screamworks: Love in Theory and Practice".

03:15
The Foreboding Sense Of Impending Happiness