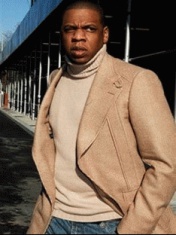 
A fabulously wealthy man (worth more than $ 30 billion), husband of the first R&B diva Beyonce and former staffing director of the Def Jam label, Jay-Z is one of the leading figures in hip-hop today, he is also often called "The greatest of MC". His youth was "stormy and interesting": for example, at the age of 12, Sean wounded his brother with a pistol, who stole his bracelets, rings and other tsatski from him; in addition, the rapper confessed that he was a young man selling cocaine and crack on the streets. Jay-Z went to school with Busta Rhymes and Notorious BIG, and of course started writing and reading early. Rap.

"Correct" acquaintances in the musical environment and joint work with the most famous hip-hop producers and artists (for example, with Puff Daddy, who initially brought Sean to fame by producing his first album) led to the fact that Jay-Z, at the same time recording his own music, he also began producing albums for various bands. At the same time, he did not lose his youthful grip - for example, in 1999 he suspected the sound engineer of the recording of making illegal copies of material for Jay-Z's new album with the pretentious name Vol. 3 ... Life and Times of S. Carter. Without thinking twice, Sean and his friends came to a party at the club where the ill-fated soundman was and stabbed him in the stomach. The case was hushed up. As a producer, Jay-Z has worked not only with hip-hop bands, but, for example, with nu-metal bands Linkin Park and Fort Minor; and nevertheless, his main discovery remains his girlfriend, and now the wife of Beyonce Knowles (Beyonce). In 2004-2007 Jay-Z was president of the leading hip-hop label Def Jam, and in 2009 he left and formed a new company, Roc Nation. He also owns the Rocawear apparel brand, a 40/40 club, and owns part of the New Jersey Jets NBA basketball team.