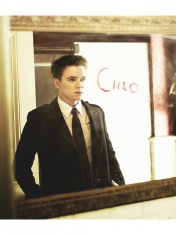 Jesse Arthur Abraham McCartney was born on April 9, 1987 in Manhattan, into a large family, father - Scott McCartney, mother - Ginger McCartney, younger brother - Timothy Glover Mark McCartney and sister - Lea Joyce McCartney.
Jesse now lives in Ardsley, New York. He graduated from Ardsley High School - June 22, 2005. From childhood, Jesse already wanted to sing and play in films, and was able to realize his dream.
First, at the age of 7, he begins performing in the local community, and then joins the play in productions of Oliver (1994), The King and I (1995 and 1997), A Christmas Carol (1998) and Fireworks on Broadway ( Salute to Broadway, 2002).
At the age of 11, Jesse gets her first role in the show All My Children. He stayed on the show from 1998 to 2001.
In 1998 Jesse got into the children's group "Sugar Beats". After singing a year in this group, Jesse falls into the boy group "Dream Street". The group originally bore the name "Boy Wonder", which was taken from a comic book magazine. It was planned to create the youngest and most popular boy group, where the age of the participants would be from 11 to 14 years old. The creators of the group were Luis Baldonieri and Brian Lukov. The group consisted of 6 members: Jesse McCartney, Jordan Knight, Billy Kennedy, Corey Austin, Greg Raposo and Chris Troisdale. The band then changed their name to Dream Street. In addition, Corey Austin leaves the group before the launch of the project due to disagreements. The band existed from May 1999 to August 2002, releasing their only album on July 10, 2001, Dream Street. The album went gold. In 2002, the boys' parents decided to file a lawsuit against the founders of the group, who wanted the members to drop out of school and focus on creativity. Although the parents won the trial, the group was ended, and the group members dispersed, continuing their careers in solo projects (the ban on further joint creativity was one of the points of the agreement).
Jesse does not launch his talent and strives to sing solo. Dream Street producers Sherri Condor and Bonnie Gallanter, with Andrew Gold and Ginger McCartney, have launched and signed JumpAhead Productions.
Jesse first recorded the songs "Beautiful Soul", "Don't You" and "Why Don't You Kiss Her," and released his first, trial album, "J Mac" in 2003. The album consisted of only 3 previously recorded songs. And then he goes on tour. After the tour, he released the full length album "Beautiful Soul" on September 28, 2004. His song "Beautiful Soul" became an instant hit. The album went platinum on February 24, 2005. At the moment, the album has sold 1.5 million copies. At the same time, in parallel, he is filming in the series "Eternal Summer", where he played there Bradin Westerly.
In 2005, Jesse decided to take part in the filming of the film "Whale", which appeared on screens in the United States in 2008. And then he decides to record the equally successful album "Right Where You Want Me", which was released on September 19, 2006. Jesse did not go on tour in support of this album because of the recording studio, which refused him this.
On May 20, 2008, the third album "Departure" was released, which became more mature than the previous two albums. Jesse collaborated with the reggae-hip-hopp group Cipes And The People. During the recording of the third album, Jesse co-wrote the song "Bleeding Love" with OneRepublic for the British singer Leona Lewis. At the moment, Jesse is busy promoting his next album and scoring various projects. Summer-fall 2013 was on tour "In A World Like This" with BackStreet Boys. In the same year he released the mini-album "InTechnicolorPart1", after a 4-year hiatus. He is currently working on a new album, which is scheduled for release in the spring 2014 year.

Клип Jesse McCartney, Ludacris - How do you sleep