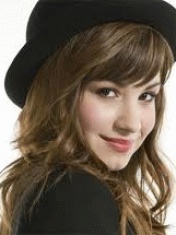 Demi Lovato is an American actress and singer who was born on August 20, 1992 in Dallas, USA. She began playing the piano at age 7, helped by her mom, who was a Dallas Cowboys cheerleader and country singer.

Her musical career began in 2008 when Demi performed with the Jonas Brothers. Then she achieved success in the acting field: Demi starred in the Disney film "Rock at Summer Camp" in the role of Mitchie Torres, who dreams of becoming a star. She performed four songs in the film, in particular - the track "This is me" as a duet with Joe Jonas. This song peaked at number one on the Billboard Hot 100.

In the same year, Lovato released his solo album "Don't Forget", recorded in 10 days and taking 2nd place in the rating. The album was preceded by the single "Get Back", which peaked at # 43 on the Hot 100. The second single, "La La Land", was released in December 2008 and peaked at # 52. The most successful was the third single "Don't Forget", released in March 2009 and reaching 41st place.

Less than a year later, Demi embarked on a summer tour to record a new album. The tour began on June 21 in Hartford, Connecticut and ended on August 24 in Manchester, New Hampshire. Immediately on June 23, the first single "Here We Go Again" was released from the anticipated album, which peaked at number 15 on the Billboard Hot. And on July 21, her second album with the same name was released.

In 2010, the singer began work on her third album, which was released in the fall of 2011. "Unbroken" differs from previous records in that there is more R'n'B, and this is not surprising, because Demi herself admitted that she was inspired by Keri Hilson and Rihanna. This album was made in collaboration with producer Timbaland. And the first single "Skyscraper" peaked at # 10 on the Billboard 100.

Until May 2012, Demi appeared less and less in public, but in the middle of the month it became known that she would be a judge in the second season of The X-Factor.

1
Made in the USA

5
One And The Same