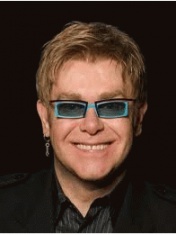 Sir Elton Hercules John - (real name Reginald Kenneth Dwight) is a popular British rock singer, composer and pianist. He had a huge impact on the development of popular music.

Elton John is one of the most commercially successful artists of the 1970s: his seven albums topped the Billboard 200, 23 singles were in the American Top 40, 16 were in the top ten and 6 climbed to number one. One of them, "Candle in the Wind", sold 37 million copies.

At the moment, Elton John is the author of 30 studio albums, 128 singles, the author of music for several films, cartoons and productions. A large number of collections of his best songs, albums with his works performed by other artists have been released. In addition, there are a number of videotapes and DVD discs on the market with recordings of his live performances and clips.

03:24
Sorry Seems To Be The Hardest Word