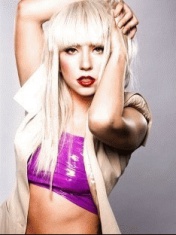 
Today in the world there is practically no person who has not heard about this artist. In just six months, from a sassy debutante, she suddenly turned into the main star of the first decade of the 21st century. Starting her career with a striptease and staging club shows, Lady GaGa retrained herself as a successful songwriter, and after a while she literally blew up the charts and television broadcasts with her songs and became one of the most talked about artists on the planet, thanks to her outspoken theatrical image. Stephanie Joanne Angelina Germanotta (Stefani Joanne Angelina Germanotta), as the real name sounds Lady GaGa, - was born on March 28, 1986 in the family of Italian Americans Joseph and Cynthia Germanotta (Joseph and Cynthia Germanotta). In addition to Stephanie, they also have a youngest daughter, Natalie. As Stephanie herself later said in an interview, her love for music and earlier hobby for playing instruments was influenced, first of all, by her father. He played in amateur bands and occasionally performed at local clubs. Thanks to the influence of her dad, Stephanie started playing the piano quite passably at the age of 4. At the age of 13, she wrote her first song, and at the age of 14, she began performing in small clubs as part of the show, which in America is called an "open microphone" - when any visitor to the institution can perform with his own small musical program or a comic number. These were her first steps on stage.

Lady signed her first contract at the age of 19 with Def Jam Records and even managed to work there with a producer nicknamed RedOne, with whom they managed to make a mash-up single "Boys, Boys, Boys". The song was a mix of hits from Motley Crue's Girls, Girls, Girls and AC / DC's TNT. Alas, nothing serious came out of this cooperation.

The second producer and, in fact, Stephanie's godfather was Rob Fusari: it was he who invented the pseudonym Lady GaGa for her, comparing her vocals with the voice of Freddy Mercury. With him, she recorded several club hits, but their popularity did not go beyond the clubs in New York. But at the suggestion of Fusari, she met the manager Vincent Herbert, who offered her to work at Famous Music Publishing. It was during her work there that Lady Gaga wrote music for Pyssicat Dolls (and even made friends with Nicole Scherzinger), Britney Spears, Fergie and even the legendary boy band New Kids On The Block. In early 2007, the Interscope label offered Stephanie to work with rapper Akon - it was this acquaintance that determined her future destiny.

As soon as he started working with Lady GaGa, Akon was so imbued with the girl's talent that he signed her to his own label. And he offered to release an album. Stephanie did not miss this chance: with producer RedOne she recorded her songs "Poker Face" and "Just Dance" in a week, and with producer Martin Kierszenbaum - "Eh, Eh (Nothing Else I Can Say)".

Lady GaGa's success came almost instantly. The first single "Just Dance" (2008) went platinum four times in the US, went platinum six times in Canada and went platinum in the UK. The song “Poker Face” reached the same level. Her first album "The Fame" (2008) has sold over 8,000,000 copies worldwide, which will be with the second "The Fame Monster" (2009) - so far no one dares to predict.