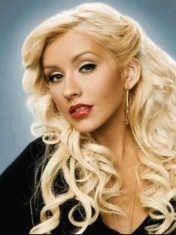 Winner of 4 Grammy awards and one Latin Grammy award. Rolling Stone named her one of the 100 Greatest Artists of All Time, making her the youngest representative and the only one under 30. With a total of over 70 million albums sold, she is one of the best-selling singers of all time.

Awarded by the US Department of State for her contribution to the fight against hunger. He is the ambassador of the World Food Program and the United Nations. Christina's participation in charitable projects has helped raise over $ 117 million.

Christina Aguilera stands out from the series of "pop idols" put on the conveyor by the presence of a proven vocal technique and the vocals itself, strong and flexible, she is compared with Mariah Carey and Whitney Houston. Before making her debut on the music scene, Christina went through a good school.

04:35
The Voice Within
Внутренний голос

04:37
The Christmas Song (Chestnuts Roasting Over An Open Fire)

04:17
Have Yourself A Merry Little Christmas
Желаю вам счастливого Рождества