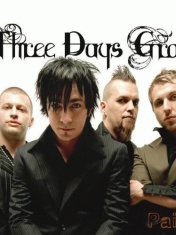 The band has recorded four studio albums so far. The first album was released under the name "Three Days Grace" on July 22, 2003.

The CD received positive reviews from critics: Dave Dorey of IGN said of the album “Mistakes? Not much, "Allmusic stated that" the band's work is unforgettable, unlike other alt metal artists. " The band's monotony was criticized: "Three Days Grace are definitely one of the most alternative bands available in the 2000s, but they lack clarity."

The first single "I Hate Everything About You" received significant support from Canadian alternative rock radio stations and became a real explosion in the world of alternative music. The song peaked at # 55 on the Billboard Hot 100, and peaked at # 2 on Billboard Alternative Songs.

Album Three Days Grace reached number nine on the Canadian charts and 69 on the Billboard 200, and in December 2004 the album was certified gold by the RIAA and double platinum by the CRIA.
The second single, "Just Like You", gave the team another number one spot in Canada, as well as topping Billboard Alternative Songs, again peaking at # 55 on the Billboard Hot 100. The next single released was "Home".

After joining the band with guitarist Barry Stock in late 2003, Three Days Grace embarked on a tour, serving both as an accompanying lineup of eminent colleagues and as headliners. In June 2006, the musicians "Three Days Grace" presented their next album "One-X", which became the debut for the new member of the group - the second guitarist Barry Stock. The album debuted on the Billboard 200 at number 5. In the first week of sales, 78 thousand copies were sold, and over the entire time of sales in the world more than 6 million. The singles were released from the album - Animal i have become, Pain, Never too late, Riot.

The song Pain managed to beat the success of I hate everything about you and Just like you reaching number 44 on the Billboard Hot 100. In support of the record, the band performed a number of live performances together with well-known bands - Staind, Hoobastank, Nickelback, Brеking Benjamin, Seether, Red and Skillet ... In 2007, Three Days Grace became the best rock band according to Billboard magazine. On September 22, 2009, the third studio album, Life Starts Now, was released, which presented the group in a new sound, style and images.
On April 28, 2010, The Good Life video was released. From 2009 to 2011, the band toured with a variety of popular artists.

On October 2, 2012, the fourth studio album, Transit Of Venus, was released. This album turned out to be something new in the history of the group, it is filled with songs with a completely different sound than the previous albums. The first single is Chalk Outline.

On December 21, 2012, frontman Adam Gontier left the group. According to official figures, health problems were the cause. At the moment, the group and Adam continue their activities separately from each other.