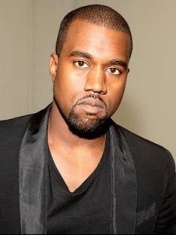 
Kanye West was born in Atlanta, but after his parents divorced, he moved to Chicago with his mother. The family was middle-class, and West's mom was an English professor. So Kanye studied well at school, and after graduation began to study at the American Academy of Arts, but his passion for music overpowered everyone else, and Kanye left the school to start recording and producing albums.

West's first successful work was Jay-Z's "The Blueprint" (2001), more precisely, four tracks from this record. At the time of the start of the collaboration, Kanye was nothing compared to the super-successful producer and rapper Jay-Z. The latter even at first refused to sign West to his label Roc-A-Fella, believing that West would be more successful as a producer - his own work did not bear the "criminal" and "street" character, so popular among the majority of hip-hop audience. However, in 2004 Roc-A-Fella released West's debut album "The College Dropout". The cover of the album features a life-size puppet of Teddy bear, who was kicked out of college - apparently, West was still worried about the "ruined" education. Subsequently, this bear, called the "dropout bear", became a kind of symbol of West and his work.

Album "The College Dropout" received favorable reviews from critics. In addition to West, famous artists Jay-Z, Mos Def, Syleena Johnson took part in the recording. The album defined West's creative guidelines - instead of writing and reading about "the hard life of black guys in the stone jungle of America", developing a gangster style and promoting vices, West focused on the pressing problems of American citizens - the texts touch upon issues of religion, family, low-paid work, self-awareness, sexuality, love, etc. The next album, "Late Registration" (2005) was even more successful than the previous one - one of the best-selling hip-hop releases of 2005, it earned as many as 8 Grammy nominations ". Two years later, in 2007, the album "Graduation" was released, also eight times nominated for a Grammy and won four awards. West's fourth studio recording, "808's & Heartbreak", is more pop-electronic and r & b-style - for example, there is very little rap, most of the vocals are "sung" using an auto-tune vocal processor. In 2010 it was revealed that Kanye West had almost finished work on a new album, titled "A Good Ass Job", due out in June 2010.
Смотреть все

Marina and The Diamonds