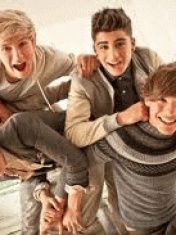 One Direction is an English / Irish band made up of five young people: Harry Styles, Louis Tomlinson, Niall Horan, Zane Malik and Liam Payne. The group formed on the UK show "X-factor" in 2010, where they finished in third place. Today the team enjoys particular popularity in France, Sweden and the UK.

The debut album of the newly minted group was released on November 21, 2011 under the name "Up All Night". Later, the music video for their first single "What Makes You Beautiful", presented by the guys, gained more than 24 million views on the popular video hosting on the Internet.

The group's second video for the song "Gotta Be You" has gained only 6 million viewers.

The team also released two books "Forever Young" - about life on the "X-Factor" project, and "Dare to Dream" - about the events after this show.

In February 2012 the band received the Brit Awards "Best British Single" thanks to the listeners of Capital FM. However, the guys mistakenly thanked BBC Radio 1 for the statuette. Because of this incident, Capital FM ignored the group's apology and boycotted it: no more news about One Direction and none of their songs were on the air.

05:11
Behind The Scenes at the video shoot of Live While We're Young

Story of My Life

One Way Or Another

What Makes You Beautiful

03:19
What Makes You Beautiful - Behind the Scenes