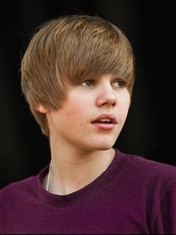 Justin Bieber is in a sense the Canadian Peter Nalich. His story is as atypical for the modern pop scene as the unexpected rise of our gypsy bard. It all started when, in 2007, at the age of 12, Justin suddenly discovered his singing talent (according to various versions - either in the bathroom, or in the kitchen, in short, at home). Without hesitation, for the sake of fun, he applied for a local competition for young talents and took second place there, although, unlike most of the participants, he never studied music and vocals. In order to "show their performance" to friends, Justin and his mother posted several videos (including a video from the aforementioned competition) on YouTube. There, these clips, without any additional advertising, quickly gained as much as 10 million views. Among those who watched the videos was a former employee of the So So Def record label Scott Braun, who contacted Justin's mother and immediately became the manager of the young talent.

Brown took Justin to Atlanta to consult singer Usher about his teenage career. Asher immediately signed Bieber to his record company, bypassing Justin Timberlake, who, according to rumors, also wanted to grab a tidbit. In 2008, a contract with Island Records followed, the release of their debut album (which features Usher, Sean Kingston and Ludacris) and fame already beginning to go international. Bieber even had a chance to speak at the White House for the Obamas.

The prodigy's work is intended for those who love modern r & b and the songs of the same Timberlake, Usher, Britney Spears, N'Sync, J-Lo and other similar artists. This is a well-arranged pop music, where all parts of live instruments (guitar, bass, drums) sound light and unobtrusive and complemented by an equally soft electronic backing. Bieber's album has it all: dance action movies, gentle ballads and hot r & b hits. The singer's almost childish voice, unaffected by professional activities, certainly gives this music a certain charm.

06:45
Клип Chris Brown, Justin Bieber - Behind The Scenes of "Next To You"

Let Me Love You

1
Where Are Ü Now

03:13
Only Thing I Ever Get For Christmas