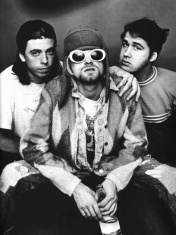 Nirvana is an American rock band formed in 1987 in Washington by vocalist and guitarist Kurt Cobain and bassist Christ Novoselic.

In 1991, the band released their second album "Nevermind" /

The third and last album of the group "In Utero" was released in 1993. The compositions from this album differed in style from the previous musical works of the group.

On April 5, 1994, Kurt Cobain died, in connection with which the history of one of the brightest groups of the twentieth century was interrupted.

Nirvana used abrupt transitions from slow, quiet sound to loud sound in her songs. Shortly before his death, Cobain said that the group was tired of the monotonous formula for writing music, but at the same time expressed the opinion that the members of the group were hardly skillful enough to try anything else. Cobain's style of rhythm guitar, which relied on power chords, low riffs and careless right-hand play, contained key components of the band's songs. Cobain would often play the riff of the song's verse in a clean tone, then double it with a distortion guitar, repeating the part already played. He rarely performed guitar solos, which were light variations of the main melody of the song. Most of his solos were based on blues and out-of-tune guitar sounds.

Cobain once said, "We play so hard that we can't tune our guitars." The band had a habit of destroying equipment after concerts. Novoselic said that he and Cobain created this "chip" to quickly leave the stage. Cobain stated that it all started as an expression of his negative emotions, which appeared due to the fact that he and Chad Channing made mistakes during the concerts.