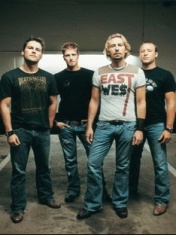 
Nickelback was founded in 1995 in Hannah, Alberta, Canada. The name of the band was given by bassist Mike Kruger, who worked as a cashier in a Starbucks cafe and said the phrase “Here's your nickel back” several hundred times a day.

Nickelback's mainstream success came in 2001 with the release of their third album, Silver Side Up, featuring the song How You Remind Me, which the band has never broken since then. The single became a mega-hit all over the world, and even in Russia devoted listeners of Ultra radio switched to another wave, because there was literally nowhere to go from “How You Remind Me”. Since then, the group has enjoyed steady levels of popularity and income, and even performed at the 2010 Winter Olympics closing ceremony.

Quite remarkable is the fact that Nickelback is one of the most criticized rock bands of all time. There is an opinion that the band's music consists entirely of clichés - pseudo-dirty guitars (with very meticulously worked out arrangements), hoarse vocals a la Kurt Cobain and lyrics about how everything is bad in the world, but the strong in spirit will win anyway.

Nickelback is often hailed as the worst band in the world and accused of the fact that all their albums are completely faceless, absolutely indistinguishable from each other and do not contain an ounce of originality (although, in fairness, it should be noted that the voice of Nickelback singer Chad Krueger is quite recognizable). However, despite such a negative attitude from critics, the people are very fond of the group, constantly receiving various awards, collecting sold-out concerts and selling albums in millions of copies. Apparently, Chad Krueger was able to feel what the audience expects from the modern post-grunge band, and each new Nickelback album is a skillful speculation on these expectations.

04:11
Gotta Be Somebody
Должен быть кто-то

03:13
12
When We Stand Together
Если мы будем держаться вместе

03:45
Fight for All the Wrong Reasons