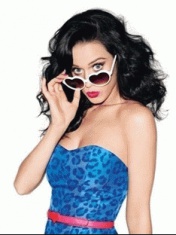 Born in Santa Barbara into a family of pastors, Katie was not allowed to listen to music, which her mother called "mundane," in her early years, which did not prevent the girl from secretly listening to her older sister's tapes and dancing. For some time, Katie studied Italian opera at the Santa Barbara Academy of Music. At the age of 15, Katie began taking singing lessons and learned the basics of music from local country veterans; the aspiring singer was signed by the Christian label Red Hill.

From the cover of her solo album, Katie Hudson looks with a sinless blue eye. 11 songs "Katy Hudson" - emotional girlish gospel with a clear touch of rock - not so bad material, although the album went completely unnoticed. After the release of her debut album, Katie changed her name and went to conquer Los Angeles. The first attempt was unsuccessful: a contract with Columbia Records brought her a long-term collaboration with the production group The Matrix, but the album was never released.

The all-out reboot that spawned Katy Perry the way millions have recognized her - with her pin-up looks, flowery dresses and hooligan songs - came after signing with Capitol Records, which included a mandatory re-image clause. The career of a former orthodox Christian woman began to be built on the principle of scandalousness. The first video that the singer was supposed to present was for the song "Ur So Gay", as a result of which the singer was accused of homophobia and at the same time got Madonna as a fan. Perry's first single was "I Kissed A Gir", a powerful electropop with guitars that has been heavily featured in every possible broadcast. For him, the singer, in turn, was attacked by the previously sympathetic Christian media and was accused of exploiting lesbian topics. Needless to say, Perry is not a lesbian, but the owner of an excellent PR company.

Among the singer's latest highlights is the song “If We Ever Meet Again” with Timbaland, which appeared on his album “Shock Value II”. Now the singer is working on her new album, inspired by The Cardigans and Madonna, where she promises to present the same energetic girlish pop-rock. Flashed in episodes of a couple of TV series, Perry in 2011 will appear in the film about the blue gnomes "The Smurfs" as Smurfette.

This Is How We Do

03:50
Dance With The Devil
Comments