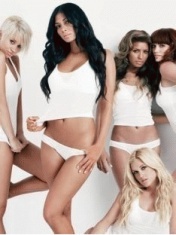 
An American pop / R&B group dance ensemble with female vocals, founded by choreographer Robin Antin in 1995 as a burlesque dance troupe formed in Los Angeles. After gaining national attention, Antin eventually struck a deal with Interscope Records in 2003, making the band a music franchise. Since then, the group has gained a global image and commercial brand under the leadership of Antin, Interscope and various partners. They have appeared in reality TV shows, in Las Vegas shows, and in commercials, among other things.

The band's success came in 2005 with their first album PCD, which debuted at No. 5 in the US with three successful singles "Don't Cha", "Buttons" and "Stickwitu"; the latter song earned the group a Grammy nomination. After the departure of Carmit Bachar in March 2008, the group continued as a quintet, and in September of that year they released their second album, Doll Domination, releasing singles such as "When I Grow Up", "I Hate This Part" and "Jai Ho! (You Are My Destiny) ".

During the group's rise to fame, the group was criticized for their overtly sexy image and overt dance moves. The group was also accused of overemphasizing the lead singer Nicole Scherzinger, who sings all of the lead vocals in the group. In late 2009 / early 2010 the band took a hiatus to record their third album and present their third world tour. Since then, it has been confirmed that Jessica Sutta, Kimberly Wyatt, Ashley Roberts and Melody Thornton have all left the group to pursue their solo careers. In May 2010, it was announced that Scherzinger would remain the main lead singer of the group with new members Vanessa Curry, Carrington Payne, Rino Nakason-Razalan and Jamie Lee Ruiz, who will create a new studio album in 2010 and go on a world tour.

Today it is one of the most popular girls-bands on the planet, earning considerable interest on interpreting the legacy of the Spice Girls: sexuality + pop patterns. True, the Pussycat Dolls (or PCD) have even more aggressive sexuality, the videos are even more explicit, and the music is much more "pop". And if Spice Girls were loved mainly by teenagers, then PCD from the very beginning of their career relied on an adult male audience. Actually, the Pussycat Dolls actually have two “birth dates”. In 1990, choreographer Robin Antin (born July 6, 1961 in Los Angeles, USA) - collaborated with Paris Hilton, Anastacia, Pink, The Offspring and No Doubt - began working with two dancers Christina Applegate (Christina Applegate) and Clara Kama (Carla Kama) on the production of a club show in the genre of "burlesque" - a costumed semi-erotic show with an emphasis on deliberately sexy retro-style costumes. And in 1995 PCD gave their first public performance. The music of the 50-60s of the last century was used as a "soundtrack" for it. Thanks to Entin's administrative talent and connections, the PCD show received a permanent residence permit at The Viper Room. According to rumors, the shareholder of the club, actor Johnny Depp, once saw the performance of the "dolls", exclaimed: "That's why I opened my establishment!"

03:53
Whatcha Think About That