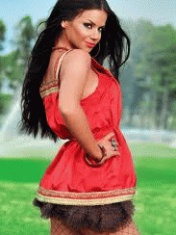 Bianca was born in Minsk on September 17, 1985. Since childhood, she professionally began to study music. The fruitful work and talent of the girl contributed to the fact that at the age of sixteen she already received the Grand Prix at the international competition for young performers "Malva", and then the Grand Prix at the festival of young performers of pop song and dance "Belaya Rus". But not only Bianca's vocal abilities were appreciated: at the Oginsky International Competition, she took third place in the cello class. After that, the young singer worked for four years as a soloist of the State Orchestra of Symphony and Pop Music of the Republic of Belarus under the direction of Mikhail Finberg. But when in 2005 the famous rapper from Belarus Seryoga, who had already moved to Moscow by that time, offered Bianca cooperation, she, without hesitation, accepted his invitation.

In the same year, Bianca sang in a duet with Max Lawrence the composition "Swan" from the soundtrack to the Russian blockbuster "Shadowboxing". The track just blew up the charts and radio broadcasts! This success simply inspired the singer and she began to act now independently. Bianca calls her style “Russian folk R'n'B”, the peculiarity of which is the use of balalaika and accordion.

The singer's debut disc, entitled "Russian People's RnB", was released in early September 2006. In August 2007, a reissue of the album was released, which was named "Pro Summer". In addition to all the tracks from "Russian People's R'n'B", the disc also included a hit that won the hearts of many - "About Summer". Bianca was nominated for 3 MTV Russia Music Awards in the categories Breakthrough of the Year, Best Female Artist and Best Hip-Hop Project.

At the moment, Bianchi has four albums, the last of which was recorded in 2011 and is called "Our Generation". In 2012, she released the singles "A Che" and "Spring - Summer 3".