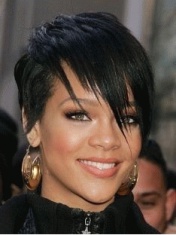 
Rihanna's name became known to everyone after the release of the single "Umbrella". The song, performed by a duet with rapper Jay-Z, became the most memorable hit of the year, it was publicly sung by everyone from Amanda Palmer and Mike Shinoda from Linkin Park to the editor-in-chief of Afisha Yuri Saprykin, and the day of the single's release in the UK, there was a downpour that gradually turned into a flood. In fact, the singer was super successful even before that: the album "Good Girl Gone Bad", from which the song about the umbrella comes, was preceded by two more, each of which hit the American top True, at the time of their release, when Rihanna had not yet got rid of her long curls, singing songs about love and the Caribbean sun (a girl from the island of Barbados, where she managed to become the face of the country and the main cultural heritage), no one really suspected, that "another R&B" singer will be able to conquer her own (and rather spacious) niche in the modern show business.

As time went on, Rihanna's image became more and more brutal - from a romantic girl-chorus Miss Fenty turned into a predatory trimmed latex diva. Roughly the same thing happened with her sound. Rihanna is still referred to as R&B in the old fashioned way, but in reality she is more of a modern dance fusion. Rihanna's singing style really gravitates towards something that has grown out of classical soul, but in arrangements (here a whole army of famous producers work for the singer, including StarGate and Timbaland) freely moves from reggae and Caribbean tunes to house and electropop. Another feature of Rihanna's songs was the abundance of musical quotes. In "SOS," it's easy to hear the riff borrowed from Soft Cell's hit "Tainted Love," and the song "Shut Up & Drive" is built around a bass line from New Order's action movie "Blue Monday." The Urban Mafia considered Rihanna "their girl" and welcomed her into their ranks with open arms. Notable guests regularly appear on the singer's albums: in “Rehab”, Justin Timberlake (Justin Timberlake, in “Hate That I Love You” - rapper Ne-Yo; besides, Rihanna herself does not shy away from singing “on the side”. one cannot but recall the song "Run This Town", which was released on Jay-Z's album, and apart from Rihanna, you can also hear Kanye West ..

Since the beginning of her career, Rihanna has won 80 awards from 147 nominations. Rihanna has three Grammy awards (in 2008, the song "Umbrella" was recognized as the best song / rap duo, and in 2010, the track "Run This Town" received two statuettes). The album "Good Girls Gone Bad" won the Juno award, twice the singer was presented with the Urban Music Awards, three times with the Billboard Music Awards, and four times with the NRJ Music Awards. The clips were also awarded: the video for the song “Umbrella” was to the taste of the MTV VMA jury (clip of the year), and MuchMusic Video (the most popular clip). The same award, only in the category "Best International Video", was received by the video for "Don't Stop The Music". The same song also won the International Dance Music Awards for Best R & B / Urban Track.

02:00
Break It Off
Давай займёмся сексом