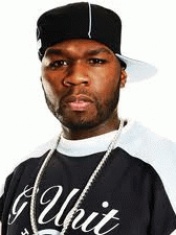 50 cent is an American rapper. Curtis has a difficult fate: he grew up with the parents of his mother, who gave birth to him at the age of 15, and at 23 died from gas poisoning. Then the boy begins to get involved in boxing and trade in crack. Somehow he is caught doing this and given 3 years in prison, but the rapper manages to get parole. After giving up the drug trade to devote himself to music, he is shot 9 times in 2000. Then he takes on the pseudonym 50 cent "for a change" and starts recording his first songs in his friend's basement.

He became famous after the release of the albums "Get Rich or Die Tryin '" and "The Massacre", which sold a total circulation of 36 million copies.

After the release of his mixtape "Guess Who's Back?" the rapper notices Eminem and signs a contract with him. Thanks to the production assistance of Eminem and Dr. Dre, the rapper achieves commercial success and becomes one of the best-selling performers in the world. In 2003, he founded G-Unit Records, which has signed artists such as Young Buck, Lloyd Banks and Tony Yayo. 50 Cent has had many clashes with other rappers including Ja Rule, Game, and Fat Joe.

The rapper's new album, Five (Murder By Numbers), is slated for release in July 2012.