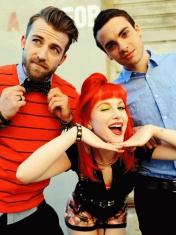 In 2003, at the age of 14, Paramore vocalist Hayley Nicole Williams moved from her hometown of Meridian to Franklin (USA), where she met her brothers, Josh and Zach Farro. Soon after her move, she began taking vocals lessons from Brett Manning. Prior to Paramore, Haley and Jeremy played in a funk band called The Factory, while the Farro brothers played in their garage after school. The band was formally formed in 2004: Josh Farro (guitar / backing vocals), Zac Farro (drums), Jeremy Davis (bass) and Hayley Williams (vocals), later joined by Hailey's neighbor Jason Bynum (rhythm guitar ). They adopted the name Paramore, which derives from Jason's mother's maiden name. When the band understood the meaning of the homonym of the word "paramour" (lover), they decided it was a great name for the band. But still we settled on "Paramore". They wrote the first song "Conspiracy" together, later it was included in their debut album.

Over the following years, Paramore performed in Nashville and surrounding cities, including festivals such as the Purple Door and Warped Tour. There they were noticed by John Janick, founder of the music label "Fueled by Ramen". Janick went to Florida to meet the guys. Without hesitation, in April 2005, Paramore signed a contract and went to Orlando to record their debut album, "All we know is falling", but soon after arriving, Jeremy decided to leave the group, citing personal reasons. The other four band members continued recording the album. The cover of the first album reflected all the hardships that the guys had to face. Haley: "The empty couch (on the AWIF cover) with the shadow of a man walking away speaks of Jeremy leaving us feeling empty." The album also includes the song "Brighter", which they dedicated to Hayley's friend Lanie Kealhofer, who drowned in the river. The album was recorded in just three weeks. Even before the tour, the lineup of the group changed somewhat. Jeremy was replaced by John Hembree (bass). Throughout the summer, they performed at the Shira Girl Stage of the 2005 Warped Tour. After five months, John leaves, and Paramore asks Davis to return. "All We Know Is Falling" was released on July 24, 2005 and reached # 30 on the Billboard Heatseekers Chart.
Paramore soon filmed a video for the song "Pressure", directed by Shane Drake. The video flopped in the charts. But later the song was included in the soundtrack for the video game "Sims 2" for Playstation 2 and Xbox. In July the band released their second music video "Emergency". Shane Drake again took the director's honorable place. In the video, Paramore is presented in a completely different way. This time we see a mixture of blood and beautiful outfits. In this video, Hunter Lamb debuted for the first time, replacing Jason on guitar. The third single was the song "All We Know", the video was released on air restriction. It consists of a collection of live performances by the band and backstage footage. In 2006 the band covered the song "Foo Fighters - My Hero" for the film "Superman", which was released on June 26th. In the summer of that year, Paramore played at festivals such as Warped Tour, Volcom and Hurley Stage. They were also nominated for Best New Group in 2006, and Williams was ranked # 2 on the Hot Women list of the popular British magazine Kerrang!

Paramore have begun recording their second album, "Riot!" in January 2007. At the beginning of the year, Hunter Lamb got married and left the band, so Josh had to record two guitar tracks on the album. Lamb was replaced by guitarist Tyler Yorke, who was a member of the Farro Brothers' group before they met Haley. Tyler is not part of the band's official lineup, he was invited as a temporary member during the tour. True, it is rumored that soon York will be a permanent member of the group, although he still has to make a choice whether to stay or follow in Hunter's footsteps and leave the group in order to get married.

The band decided to record "Riot!" in New Jersey, the album was produced by David Bandad. The album was released on June 12, 2007. "Riot!" immediately started on the "Billboard 200" at number 20, on the "UK chart" at number 24. In its first week, 44,000 copies of the album were sold in the United States. The name Riot! was chosen because it means "Sudden explosion of uncontrollable emotions." The first single from the album, the song "Misery Business", was released on June 21, 2007. "Misery Business is the most honest song I've ever written," Williams said, "and the guys got the music in their best mood."
In the summer of 2007, Paramore took part in the 3rd Warped Tour and shared their experiences with young bands by writing a post on "yourhereblog" for MTV. The second single from Riot !, "Hallelujah", was released on 30 July 2007 and is currently only available online and on UK TV. This video, as well as "All We Know", included backstage footage and live performances. In August, Paramore appeared in the New Found Glory video for the song "Kiss Me".
On October 11, 2007, the music video for "Crushcrushcrush" debuted in the US as the next single from Riot !. The idea of the video - the group plays in the middle of the desert, they are watched by spies who, at the end of the video, smash all their equipment. On December 31, 2007, New Year's Eve, Paramore performed on MTV, which could be watched from 11:30 am to 1:00 am.

In February, Paramore was featured on the cover of Alternative Press magazine.
The group was also nominated for Best New Artist at the 50th Annual Grammy Awards on February 10, 2008, but they lost to Amy Winehouse. In early February, the Paramor toured Europe, but on the 21st of that month, they announced that they were canceling six shows due to personal concerns. Haley wrote on her LJ blog: "Taking a break will give us a chance to leave and figure out ourselves." After that, rumors about the breakup of the group spread on the Internet.
However, the band returned to their hometown of Nashville to film a music video for the song "That's What You Get", which was released on March 24, 2008. On May 19, Paramore announced on their official website that they were going to tour again and gave it a title. "The Final RIOT!" Which lasted from July 25 to September 1.

Paramore are recording a new song, "Decode", which was written specifically for the Twilight movie. Another song "I Caught Myself" became the soundtrack for the film. The band began filming the music video for "Decode" on October 13. The video premiered on November 3, 2008. The band released a live album entitled "The final Riot!" 2008. The album includes a DVD of the full Chicago concert as well as a documentary video "40 Days of Riot!"

In November, Josh Farro announced that the band is working on their 3rd album: "The songs are not finished yet, but we have a few ideas, about 8 to 10 arrangements. We are probably close to recording. I think next the album will be more dynamic than the last one. We want to experiment with the music, but stay Paramore. It's difficult, but we have really cool songs, like the acoustic song we wrote with Tyler and it doesn't sound like anything, what we've done before. "

In January 2009, it was announced that Paramore, along with Bedouin Soundclash and The Sounds, would be special guests on the 2009 reunion No Doubt Reunion Tour, starting in May 2009 at major arenas in the US and Canada. Paramore entered the studio on March 23 to record a new album. The guys aim to finish it this summer. In LiveJournal, the band announced that their new producer will be Rob Cavallo (who has already produced "Decode" and is known for working with artists such as Green Day, Avril Lavigne, Less Than Jake and My Chemical Romance). Paramore is recording their third album in California at Hidden Hills.

Paramore completed work on their third studio album, "Brand New Eyes", which was released on September 29, 2009. The first single from the new album, "Ignorance", was released on July 7, 2009.
On August 13, the new official video for the song "Ignorance" was broadcast on all MTV channels, networks and websites. In this video, Taylor York first appears as an official member of the group. The group announced on their official website that they will begin their US tour soon, starting on September 29, the day of their 3rd album, and ending on November 1 in their hometown.

On September 29, vocalist Hayley Williams had to leave the stage during the first performance of the tour in support of the new album. Later, on October 2, it was announced that Hayley Williams had laryngitis, for this reason some tour dates were shifted. On November 23rd, the band released their second single "Brick By Boring Brick" from the new BNE album, and the video debuted on the band's website. Following "Brick By Boring Brick" was a video for the tracks "The Only Exception", released on January 14th, and "Careful". After Paramore toured Europe with You Me At Six, Paper Route and Now Now Every Children. Also in 2010, the band performed at the Australian Soundwave Festival, alongside bands such as Faith No More, Placebo, You Me at Six, All Time Low, Jimmy Eat World and Taking Back Sunday.

Shortly after the start of the tour, guitarist Josh Farro wrote in the band's LiveJournal that he would be absent from the shows, as he was now busy preparing for his wedding. Justin York, Taylor Yorke's brother, replaced Josh during the tour.
With Farro's return, the band embarked on a spring US tour.
In April 2010, the group announced that they would be the handliners for the Honda Civic Tour. It was the biggest tour the guys have ever led. Paramore opened with Tegan and Sara, New Found Glory and Kadawatha. The tour kicked off on July 23 in North Carolina and ended on September 19 in California. In May 2010, the group announced a short UK tour in November 2010. During an interview with MTV in December, Hayley and Taylor revealed that the group will be resting after the 2011 South American Tour to begin work on their fourth studio album.

On December 18, 2010, an announcement from Haley, Jeremy and Taylor appeared on the group's official website announcing Josh and Zach's departure from the group. However, they also confirmed that the planned South American Tour will not be canceled. Josh Farro later wrote on his blog about the reasons for their departure, with Zach from the group. As it turned out, the points of view of the "two sides" do not quite coincide.

In an interview with MTV on January 10, 2011, Haley said that despite the departure of two of its main members, they will continue to work on new material in 2011. The truth is, it is not yet known if they will manage to record an entire album for release this year, or if they will only release some of the songs. She also admitted that Paramore's style is likely to change, but they will still keep "their sound".
On February 2, Josh Farro revealed the name of his new band "Novel American", which later included his brother Zach.
In 2011, the band recorded the EP "Singles Club", gave a number of concerts in South America, as well as a mini world tour.
2012-2013: Paramore.
On March 21, 2012, the band began work on a new, fourth studio album and finished recording on November 1. The album, entitled "Paramore", is scheduled for April 9, 2013. Before the release of the fourth album, the group will release the single "Now".

Клип Paramore - That's What You Get

04:27
The Only Exception
Единственное исключение