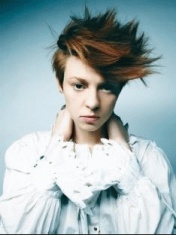 
British duo La Roux (which means "redhead" in French), which is often taken for a solo project by vocalist Ellie Jackson, was the first to sign the label Kitsune, sensitive to new talents. "She's only nineteen, but she's sure to be a star," label owner Gildas Loaëc said of Ellie Jackson. The recipe for La Roux's music was simple but effective: deliberately simple electro-pop arrangements with references to the eighties (Ben Langmaid, a longtime friend of Rollo Armstrong from Faithless, is solely responsible for the electronics in the group), plus Ellie's shrill, slightly hysterical voice. The music was complemented by a vivid visual image of the red-haired singer, who loves exotic outfits in the spirit of new-wave performances from thirty years ago. The first single, "Quicksand", was a success. The record, released in France, even managed to get into the British chart, after which the group was signed by the major label Polydor. 2008 ended for the group with the first truly hit single "In For The Kill" (second place in the United Kingdom) and hitting the fifth place on the "Sound of 2008" list, where British critics determined the best newcomers in their opinion. The single "Bulletproof" and the album that followed it, which went platinum in Britain, finally confirmed La Roux in the status of stars. The band went on a big festival tour, bringing a drummer and two keyboardists on board and leaving Ben at home. He preferred not to bother touring and only engage in studio work. The fourth single "I'm Not Your Toy" did not repeat the commercial success of the previous ones, but it was remembered for its striking video. The video was directed by duo AlexandLiane, who previously worked with Bloc Party, Ting Tings, Mika, Sam Sparro and Scissor Sisters.