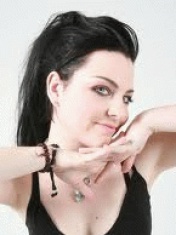 Evanescence is an American rock band formed in 1996 by vocalist Amy Lee and guitarist Ben Moody. They are originally from the small town of Little Rock, Arkansas, USA. And we met at a Christian youth summer camp in 1994, when they were 13 and 14 years old, respectively.

Their joint work began with two mini-albums "Evanescence" and "Sound Asleep", these demos appeared in 1998. However, their 2003 album "Fallen" brought wide popularity to the group. It has sold about 15 million copies and brought the group 2 Grammy Awards. This disc was recorded after the other musicians joined the group. Prior to that, there was also the "Origin" album, recorded with keyboardist and backing vocalist David Hodges. Album "Fallen" debuted at # 7 on the US Billboard Top 200 Album Chart and stayed there for 104 weeks.

In October 2003 the collective released the single "My Immortal". The songs "Going Under" and "Everybody's Fool" were also released as singles from the album. For all four songs, video clips were shot, winning in the MTV charts.

In 2004, the first live album, Anywhere but Home, was released, which included all the band's videos, as well as interviews with the musicians. Even before the filming of this DVD, Ben Moody left the band. The recording of the group's second album proceeded very slowly, it was only released in 2006. The album was released on October 3 and immediately topped the charts in the USA, England, Australia, Germany, it went platinum a month after its release. "The Open Door" entered the Billboard Chart at # 1. However, a split was brewing in the group, and so, in 2009, former band members Ben Moody, John LeCompte and Rocky Gray formed the group "We Are The Fallen", named after one of the albums.

In 2010, Evanescence released the official B-side of The Open Door, Together Again. The single was released after the earthquake in Haiti. All the money from the sales went to charity.

The album of the same name, "Evanescence", was released in 2011. The first single is titled "What You Want" and the single was released on August 9th.

The composition of the group has changed several times. The band left: keyboardist David Hodges (2002), guitarist Ben Moody (2003), bassist Will Boyd (2006), guitarist John LeCompte (2007), drummer Rocky Gray (2007). As a result, only vocalist Amy Lee remained in the group from the original line-up.