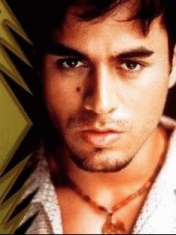 The hot Spanish guy has become almost native to the Russian public. Firstly, he recorded a duet with one of the most popular singers of the 90s, Alsou, and secondly, he shot Anna Kournikova, the most famous tennis player in the world, in his video. Moreover, Enirke did not limit himself to professional relations: it seems that there is no tabloid left in the world who would not write about their romance with the most famous blonde from Russia. The most surprising thing is that the career of a singer, who, it would seem, for dynastic reasons had to strive for the stage, could not have taken place. The fact is that his father, Julio Iglesias - himself a world star - really did not want his third (and last) son from his first marriage to follow in his father's footsteps. Iglesias Sr. passionately wanted Enrique (born May 8, 1987) to become a businessman. For this, he “pickled” him in one of the most prestigious schools in America and kept him “in a black body”, and then forced him to enter the University of Miami: learn the basics of business and get an MBA. Although Enrique Iglesias obeyed his dad, he secretly dreamed of the stage, wrote lyrics and recorded at local studios under the pseudonym Enrique Martinez. In 1995, his demo got to the managers of the Fonovisa label, and they offered him a contract to release the album. The young artist did not refuse. He simply confronted his parents with the fact that he was leaving the hated university, and left for Toronto to record a disc.

In 1995, the disc, simply and without fuss called "Enrique Iglesias", in its first week of sales crossed the bar of 500,000 discs sold, which was an unprecedented result for albums not recorded in English.

The single "Enomorado Por Primera Vez" from the second album "Vivir" (1997) topped the Latin American charts for 12 weeks. And at the end of the year, the incredible happened - Enrique got into one nomination for the American Music Awards with his father.

In 1998, Enrique finally gained worldwide recognition. More precisely - it came a little later, but it was in 1998 that the album "Cosas del Amor" was released, in which there was the song "Bailamos", which adorned the film "Wild, Wild West".

Almost immediately, "hot on the heels" "a boy with a mole" recorded and released his first English-language album "Enrique" (1999), which, among other things, was notable for the song "You are me # 1", where our Alsou noted.

2001 Enrique met, firstly, with the ballad “Hero”, written in honor of those killed on September 11, 2001, when the planes rammed the twin towers of the World Trade Center, and, secondly, with the new album “Escape”. "Escape" became a really iconic album for the artist: it was the most successful disc in his career until the release in 2003 of the absolutely disastrous album "7" ("Seven").

The reaction of the public and critics touched the singer so much that he fell silent for 4 years. He returned only in 2007 with the album "Insomniac" - a fairly solid work, which still fell a little short of the success of "Escape". But the track "Can You Hear Me" became the official song of the European Football Championship 2008, where the Russian team won bronze medals. Return to big show business had such a fruitful effect on Enrique that he immediately released two more records in a row "95/08 Éxitos" (2007) and the compilation "Greatest Hits" (2008).

Tired of being sorry