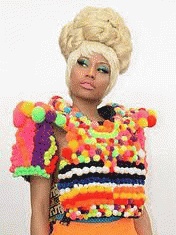 Nicki Minaj is a rapper and songwriter. She was born on December 8, 1982 in the suburbs of the capital of the Republic of Trinidad and Tobago to parents of Indian and African descent. She lived there until the age of five with her grandmother, and then her mother took her to Queens. Despite the change of place of residence for the better, the life of the future singer was difficult: according to Minaj, his father drank, took drugs and once tried to kill his mother by setting the house on fire.

As a child, Niki connected her life with music: she studied at Elizabeth Blackwell Middle School, where she played the clarinet.

The singer's career was shaped by Lil Wayne, who, after hearing the mixtapes Playtime Is Over, Sucka Free and Beam Me Up Scotty, signed her on behalf of his label Young Money Entertainment in August 2009.

After signing the contract, Minaj began work on her debut album "Pink Friday", which reached number two on the Billboard 200 in its first week of sales. Minaj became the first artist in history to have seven songs simultaneously on the Billboard Hot 100 chart.

Her second single, "Your Love", topped the Billboard Hot Rap Songs chart, something no other rapper has done since 2002. In addition, Minaj became the first rapper to be included in the MTV Annual Hottest MC List.

A month after the release of "Pink Friday", the album went platinum. The singer has been nominated for many awards and prizes, including a Grammy.

In 2012, Nicky's second album, Pink Friday: Roman Reloaded, was released. In this album, Roman Zolanski returns (most of the tracks on the album are performed on his behalf) - Nicki Minaj's alter ego. For the first time Niki performed a song on behalf of Roman on her first studio album "Pink Friday" (track "Roman`s Revenge"). The album combines such styles as Hip Hop, Disco, Teen Pop, R&B, Eurodance, Europop, and Dance-Pop.

04:23
I Endorse These Strippers