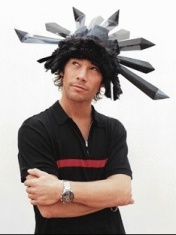 The name of the group is its leader and founder, an Englishman of Portuguese origin, Jason Kay, invented in his youth, smoking marijuana (for which, by the way, he was kicked out of a private school) and dreaming of what his own ensemble could be. Jamiroquai - a combination of the words jam (jam session, collective playing) and iroquai - a variant of the self-name of the Iroquois Indians. Having started making music at home, by the end of the 80s, Jason became interested in a new music that appeared in London clubs at that time called acid jazz, "acid jazz", mixing jazz arrangements with hip-hop beats and funky rhythms. Jason first went to work as a singer with one of the founders of the genre, Brand New Heavies, but failed and instead assembled his own ensemble.

The band's first album, Emergency on Planet Earth (1993), on which the talented keyboardist Toby Smith worked as the main author along with Jason, was performed exclusively in acid jazz style and still remains a classic disc in this genre. There was a hit single "When You Gonna Learn", after the release of which Jason signed a contract for eight (!) Albums with "Sony BMG", and an 8-minute electro-jazz track "Blow Your Mind". The next album, "The Return of the Space Cowboy" (1994), was performed more in a club-dance style. Despite this, the group has already received high marks from European jazz musicians and even performed at the Montreux Festival in 1995.

Jamiroquai's popularity grew in Europe and Britain, but the group was largely unknown in the US until the release of their third album, "Traveling Without Moving" (1996), which is a nod to Jason Kay's fascination with expensive sports cars. This album spawned two world hits - the danceable "Cosmic Girl" and the philosophical funk bestseller "Virtual Insanity".

Gradually, with the commercialization of the band's creativity, the musicians of the first line-up leave Jason. In the process of recording the fourth album "Synkronized" (1999) bassist Stuart Zender leaves, and after the release of this album Wallis Buchanan and, most importantly, Toby Smith, Jason's main co-writer, left the group. The band's next album, "A Funk Odyssey" (2001), was performed to such a high percentage of the electronic dance style that critics and listeners began to talk about the loss of the "Jamiroquai sound".

However, already on the album Dynamite (2005) the group (with a completely renewed line-up, except for Jason himself) began to steer onto a new path of professional pop-jazz and funk - an example of this was the hits “Seven Days in Sunny June” and “Feels Just Like It Should ". But then Jason remembered that the contract with Sony BMG was soon ending, and to finish the deal in one fell swoop, he released a double album of hit singles "High Times: Singles 1992 - 2006" (2006).

The story of the group seemed to end there; at some point Jason even wanted to give up music altogether, but in 2010 he and his current drummer Derek McKenzie announced that the next Jamiroquai album was ready, would be released on Universal Records and would be more like the first three albums.